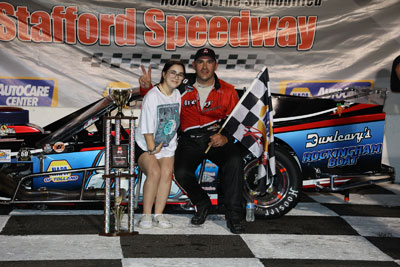 (Stafford Springs, CT)—Open Modified cars returned to Stafford Motor Speedway for their fourth of five visits of the 2022 season on Friday, July 1st for the GAF Roofing Open 80.  Woody Pitkat dominated the race to take down his second consecutive open modified victory at Stafford after winning the Bud Light 80 last month.

Eric Goodale and Chase Dowling went wheel to wheel for 2 laps before Goodale got clear into the race lead.  Woody Pitkat worked his way around Dowling to move into second on lap-3 with Dowling settling into third place.  Marcello Rufrano was fourth followed by Ryan Preece and Cory DiMatteo.  Pitkat took the lead from Goodale on lap-6 while Preece was pressuring Rufrano for fourth place.

Goodale was applying heavy pressure to Pitkat for the lead and he nearly spun in turn 4 on nlap-14 but he was able to gather his car up and he only lost one position, falling back to third as Dowling moved into second.  With 25 laps completed, it was still Pitkat in the lead followed by Dowling, Goodale, Rufrano, and Preece.  Cory DiMatteo was sixth followed by Matt Galko, Anthony Nocella, Dana DiMatteo, and Ronnie Williams.

At the halfway point of the race, Pitkat was still in command with Dowling in second.  Goodale, Rufrano, and Preece made up the top-5 with Cory DiMatteo, Nocella, Galko, Dana DiMatteo, and Williams rounding out the top-10.  The caution came out with 44 laps complete for a spin coming out of turn 2 by Matt Gallo.  Under the caution the entire field with the exception of Tommy Barrett, Jr. came to pit road for tires and adjustments.   Goodale won the race off of pit road followed by Pitkat, Williams, Dowling, Ryan Newman, Galko, Nocella, and Dana DiMatteo.

Barrett led the field back to green but he only lasted on lap in front before Pitkat took the lead on lap-45.  Dowling moved up to second with Williams taking third and Goodale fourth as Barrett fell back to fifth.  Newman took fifth from Barrett on lap-48 and Barrett continued to slide backwards, falling outside the top-15.

Pitkat led Williams and Dowling to the checkered flag to pick up his second consecutive open modified victory at Stafford Speedway.  Dana DiMatteo finished fourth with Goodale rounding out the top-5.