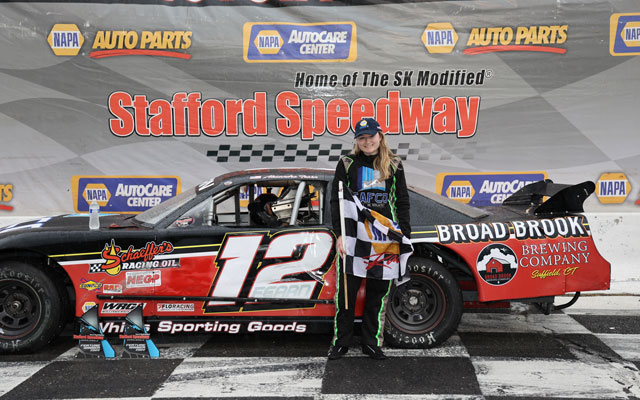 (Stafford Springs, CT)—Stafford Speedway returned to Friday night racing action with a Stafford Weekly Series program on Friday night, May 27th.  Alexandra Fearn won the Limited Late Model feature before rain prematurely brought the rest of the evening to a halt.  All tickets sold for the May 27th event will be honored next Friday night, June 3rd for the Weekly Racing / Kids Night program at Stafford.

In the 20-lap Limited Late Model feature event, Gary Patnode took the lead from polesitter Damian Palardy at the drop of the green and he led the first lap before the caution flag flew for Dana Wray, who spun in turn 4.

Patnode took the lead again back under green with Alexandra Fearn pulling alongside Palardy for second.  The field completed one lap before the caution came right back out with 2 laps complete for a spin in turn 4 by Trinity Provost.

Patnode again took the lead with Fearn and Palardy going side by side again for second.  Matt Clement worked his way up to fourth with Devon Jencik in fifth place.  Fearn took second on lap-4 and Matt Clement followed her through to move into third and drop Palardy back to fourth.  Devon Jencik took fourth from Palardy on lap-5 with Jay Clement right behind Palardy in sixth place as Patnode continued to hold the lead with Fearn giving chase.

With 10 laps complete, Patnode was still in the lead followed by Fearn, Matt Clement, Devon Jencik, Rich Hammann, Palardy, Jeremy Lavoie, Jay Clement, Kevin Cormier, and Matt Scappini.  With 5 laps to go, Fearn had closed to within a car length of Patnode for the lead while Jencik was applying heavy pressure to Matt Clement for third place.

Fearn caught Patnode with 2 laps to go and as they took the white flag, Fearn made her move to the inside of Patnode to take over the lead.  Fearn led Patnode back to the checkered flag to pick up her first win of the 2022 season after a rough start to her first three races.  Matt Clement finished third with Devon Jencik and Hammann rounding out the top-5.