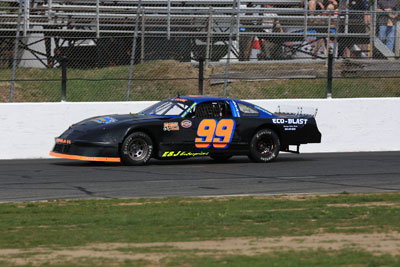 (Stafford Springs, CT)—After finishing second in points with 7 total feature wins the last two seasons in Stafford Speedway’s Street Stock division, Chris Meyer had plans to chase the championship for one last season before moving up to Late Model competition in 2023.  Meyer’s plans have now been accelerated by a year with an opportunity to drive Scott Cook’s #99 Northeast Truck & Off-Road Late Model.

“I’m really excited for this opportunity,” said Meyer.  “We had originally planned on this being our last year in the Street Stocks and we were going to go Late Model racing next season.  Scott [Cook] was looking for a driver and both Bob Fill and Don Wood at R.A.D. Auto Machine told him I’d be interested.  I gave Scott a call and we talked out some details and we were able to come to an agreement that works out really well for both of us.  This is one of the best opportunities I’ve ever had and we’re all looking forward to it.” 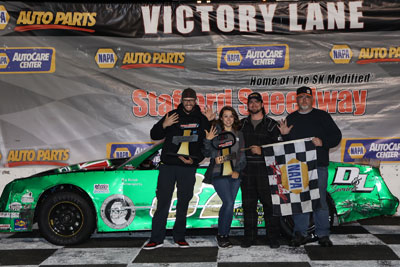 Meyer won a championship in 2017 while racing at Waterford Speedbowl and he wasted no time getting comfortable in Stafford’s Street Stock ranks.  Meyer won 2 races in 2020 and 5 more in 2021 and finished second in the points standings in both of those seasons.  With such success already under his belt, Meyer felt like he might be the favorite for the 2022 Street Stock championship, but now he will be chasing Late Model Rookie of the Year honors.

“I’d say for our first season together our first goal would be to win Rookie of the Year,” said Meyer.  “After that, we want to get a win.  I don’t expect to win opening day but we expect to compete and we all anticipate being able to run up front and prove ourselves as a team.  If we leave the season with a win and some good top-5 finishes and competitive runs, I’d say that would be a successful season.  Winning trophies is where it’s at so we want to win races.  We won a championship in 2017 at Waterford so we have a championship team and we felt like we were going to be the favorites to win the Street Stock championship this season.  Don’t get me wrong, there’s going to be some strong competition this season between Travis Hydar, Nick Hovey, and Adrien Paradis but we really felt like the favorites.  However, I’m not disappointed [about not racing for the Street Stock championship].

In addition to himself as the driver, Meyer will also be bringing his crew members along with him to the #99 team and Meyer will have his businesses listed as sponsors alongside the sponsors that Cook already had lined up for his car.

“I have a great group of guys behind me and they’ll be coming along with me to Scott’s car and I’m going to do my best to make Scott happy with me driving his car,” said Meyer.  “Scott has really good sponsors and he’s going to put D & L Services and Meyer’s Crazy Hollow Creamery on the car along with Northeast Truck and Off-Road, Randy Chamberlain and Big Butch Motorsports.”

Meyer has already been busy taking notes about the competition he will face this season and he is confident that Cook’s experience as well as advice from others will make learning a new car and division a not so tough proposition.

“I’m a student of the game so I’m always watching and learning who my competitors are,” said Meyer.  “I’ve been watching film since Scott and I made this agreement and I have a lot of people I can lean on for advice.  I’d say the biggest thing for me will be adjusting my mentality behind the wheel.  I have limited experience racing cars with a three-link suspension and a locked rear end and I’ll have to get adjusted to the horsepower difference between the Street Stock and Late Model cars.  I’m not sweating that too much because Scott has been doing this a long time and he has a great notebook to work with.  I’ve been thinking about the car day and night and I know it’s not all going to be on me.  Scott knows his car very well and he’ll be able to carry that load for me.  We’ll take things as they come and try to get better each and every week.”

Meyer and Cook will be sure to utilize all the track time they can get in the open practice scheduled for Saturday, April 16, the week before the season opening NAPA Spring Sizzler®. 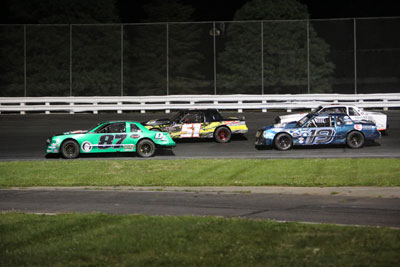 “That open practice session might be the most important track day of the year for us,” said Meyer.  “We can make the largest gains with the car that day and we’re looking to get as many laps as we can before the season starts because we want to compete and we want to look good out there.”

Meyer will begin his Late Model quest on Sunday, April 24 as part of NAPA Spring Sizzler® Weekend.  Tickets for the 50th running of the NAPA Auto Parts Spring Sizzler® are now available at staffordspeedway.com/tickets. The two day event begins Saturday, April 23rd with the NAPA Auto Parts Duel, two 40-lap qualifying races that will set the field for the 50th NAPA Spring Sizzler scheduled for April 24th. The PASS Super Late Models and all five of Stafford’s weekly divisions as well as the Vintage All-Stars will also be on hand for the weekend.