“This brought the community together, our clients, our carrier representatives, and our employees which is everything Paradiso Insurance stands for,” said Christopher Paradiso, Owner of Paradiso Insurance. “The 2021 race was better than we ever imagined.”

“I thought it was awesome, very well put together,” said Dori Wilson, Personal Lines Manager at Paradiso Insurance.  “It was great to spend time with most of our employees outside of work, our carrier reps, and our clients!  It was awesome to see all the kids go and say ‘Drivers Start Your Engines!’ and seeing one of our employees wave the green flag.  We’re looking forward to September 2nd!” 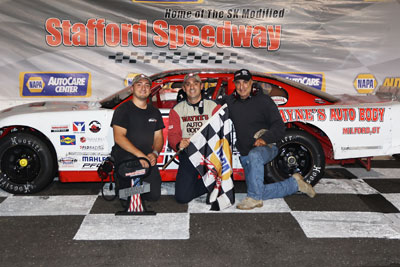 The Paradiso Insurance Late Model 50 is the longest and highest paying race on the schedule for the Late Model division.  The race features posted awards in excess of $10,000 with the winner guaranteed to take home nearly $1,500 including contingency bonuses from iRacing and Broad Brook Brewing.  The Paradiso Insurance Late Model 50 has seen 5 different winners in the last 5 seasons between Wayne Coury, Jr. in 2021, Tyler Leary in 2020, Ryan Fearn in 2019, Paul Arute in 2018, and Michael Bennett in 2017.

“The Late Model 50 was a great night, we were able to hand out some t-shirts right at the front gate which was getting our brand out there,” said Hillary Palmberg, New Business Manager for Paradiso Insurance.  “The infield experience was out of this world.  The kids and all of us running into the infield and being able to step on the race track, so many people don’t have that experience.” 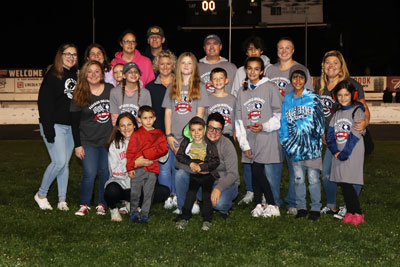 Much like the Paradiso Insurance Late Model 50 has seen parity among its winning drivers, the Late Model division itself continues to grow and flourish into one of the most competitive weekly divisions in the country.  The shortened 2020 schedule saw 7 different drivers reach NAPA Victory Lane in only 14 races while the 2022 season hit double digits with a remarkable 10 different winners spread over 19 races.

Located on Main Street in Stafford Springs, CT just a mile from Stafford Speedway, Paradiso Insurance is a local independent insurance agency that specializes in personal insurance, business insurance, and parcel delivery insurance. Owner Chris Paradiso leads the team in organizing the yearly community events that they put together, one being their annual flag day event. The Paradiso team prides themselves on giving back to the local community and believe that is the backbone of the agency.

The first $75 Paradiso Insurance contingency bonus of the 2022 season will be awarded on Sunday, April 24 as part of NAPA Spring Sizzler® Weekend.  Tickets for the 50th running of the NAPA Auto Parts Spring Sizzler® are now available at staffordspeedway.com/tickets. The two day event begins Saturday, April 23rd with the NAPA Auto Parts Duel, two 40-lap qualifying races that will set the field for the 50th NAPA Spring Sizzler scheduled for April 24th. The PASS Super Late Models and all five of Stafford’s weekly divisions as well as the Vintage All-Stars will also be on hand for the weekend.