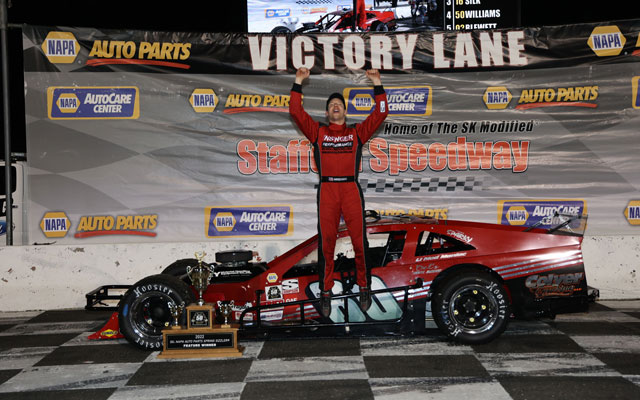 The race took the green flag with Ronnie Silk leading Ryan Preece by a nose at the line but just as the field completed the first lap, Anthony Bello and Anthony Flannery spun into the turn 1 wall to bring the caution out.

Silk took the lead back under green but he only led the second lap as Woody Pitkat shot his way into the lead on lap-3.  Silk was able to get in line in second with Matt Hirschman working his way into third.  Ryan Preece and Matt Galko were side by side for fourth place with Galko taking the spot on lap-5.  The caution came back out with 6 laps complete for Noah Korner, who spun in the middle of turns 3+4.

Pitkat took the lead on the restart with Hirschman taking second.  Silk slotted into third with Galko fourth and Preece in fifth  Sixth through tenth were Chase Dowling and Jon McKennedy, Doug Coby, Michael Christopher, Jr., and Chris Pasteryak.  Hirschman was stalking Pitkat for the lead but Pitkat was able to maintain the lead for the time being.  Jeff Gallup spun coming out of turn 2 to bring the caution back out with 12 laps complete.

Pitkat again took the lead on the restart but Hirschman went to the front on lap-14 but just as he took the lead, the caution came out for Mikey Flynn, who came to a stop in turn 1 and with scoring going back to the last completed lap, Pitkat was again the leader for the restart.

Pitkat took the lead on the restart with Hirschman looking high and low for a way to take the lead away from Pitkat.  Galko moved up to third with Silk dropping a spot back to fourth and Preece was still running fifth.  McKennedy was sixth followed by Christopher, Dowling, Ronnie Williams, and Coby.  Hirschman tried to make a move on Pitkat for the lead on lap-20 but couldn’t make the pass stick, which allowed Galko to get by him to move into second.  Galko was working the high and low lanes to find a way around Pitkat but Pitkat was able to shut down his challenges as the race clicked off lap-25.

With 32 laps complete, the top-4 cars of Pitkat, Galko, Hirschman, and McKennedy were racing in their own 4-car train ahead of Preece in fifth place.  Silk was sixth with Williams, Christopher, Kopcik, and Teddy Hodgdon making up the top-10.  Galko took the elad from Pitkat on lap-35 just before the caution came back out with 36 laps complete for a spin coming out of turn 4 by Christopher.

Hirschman streaked his way by Galko and into the lead on the lap-36 restart.  Pitkat also got by Galko to take second and drop Galko back to third place, just in front of Silk and McKennedy.  Hodgdon was up to sixth followed by Williams, Pasteryak, Dowling, and Anthony Nocella.

At the halfway point of the race it was still Hirschman in command with Galko, Pitkat, Silk, and McKennedy all giving chase.  Hodgdon, Williams, Preece, Pasteryak, and Nocella rounded out the top-10 positions.  The caution came back out with 56 laps complete for Marcello Rufrano, who got into the turn 2 wall.

Under the caution all but 3 lead lap cars came to pit road for tires and adjustments.  This put Jimmy Blewett into the lead with Coby second and Gallup third for the restart.  Silk was the first car off of pit road and he would restart fourth with Buddy Charette fifth, Hirschman sixth, Williams seventh, Preece eighth, Christopher ninth, and Pitkat tenth.

On the restart, Pitkat came to a stop in turn 1 to bring the caution right back out.  The second lap-57 restart saw Blewett take the lead with Coby in second.  Preece shot up to third with Silk fourth and Hirschman fifth.  The caution flew again with 57 laps complete as Andrew Molleur, Bobby Labonte, Todd Owen, and Nocella spun through the frontstretch grass.

Blewett held off a charge from Preece to maintain the lead on the lap-58 restart but Preece edged his nose in front of Blewett on lap-59 to take over the lead just before the caution came back out for spins in turn 1 by Molleur, Hodgdon, Korner, Owen, Jack Ely, and Swanson.

Preece took the lead on the lap-60 restart with Hirschman taking second.  Blewett fell back to third with McKennedy fourth and Silk fifth.  Williams and Christopher were side by side for sixth place with Williams getting clear on lap-61.  Chuck Hossfeld was up to eighth with Eric Goodale ninth and Galko tenth.  Hirschman was stalking Preece for the lead, nearly taking the lead several times but he was unable to complete a pass as the leaders clicked off lap-70 and had 30 laps to go.

Hirschman continued to hound Preece for the lead and he was finally able to complete a pass on lap-78 to retake the lead.  Blewett was still third with Silk and Williams making up the top-5.  McKennedy was sixth followed by Christopher, Galko, Hossfeld, and Goodale.

Hirschman and Preece began to encounter lapped traffic with 15 laps to go but the traffic didn’t slow either car down as they stayed glued together as they navigated their way through.  With 10 laps to go, Hirschman had a lead of several car lengths over Preece with more lapped cars just in front of them.  The action was slowed by the caution flag with 95 laps complete for Charette and Ely, who both spun in turn 2. 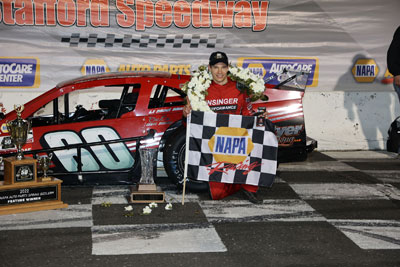 Preece was able to beat Hirschman to the line by a nose on the restart to take the lead on lap-96 and just as they completed the lap, the caution came back out for Owen and Pasteryak, who came together and spun on the frontstretch.

Hirschman took the lead on the outside of Preece but the field was only able to complete one lap before the caution came back out for a spin in turn 1 by Korner.

Hirschman took the lead on the restart with Preece getting sideways in trying to keep pace with Hirschman.  Hirschman led Preece to the checkered flag to win the 50th Annual NAPA Spring Sizzler®.  Silk finished third with Williams and Blewett rounding out the top-5.