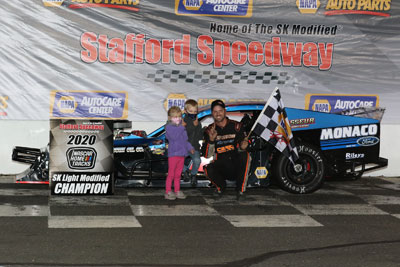 (Stafford Springs, CT) — After winning the SK Light championship in 2020 and finishing second to Derek Debbis by virtue of a tiebreaker in 2021, Brian Sullivan will make a return to the SK Modified® division this season.  Sullivan ran 2 full seasons and 4 partial seasons in the SK Modified® division from 2010-2016 and he is looking forward to returning to the premier division at Stafford behind the wheel of the #46 Monaco Ford Mustang.

“I’m looking to go back to full-time SK Modified® racing this season,” said Sullivan.  “I had a lot of fun the last couple years in the SK Light division but I always had the itch to go back to the SK Modified® division at some point.  I feel like I have the best equipment I’ve ever had so it was a good time to make the move and give it a shot and all of my sponsors and supporters, Monaco Ford, Glastonbury Oil Co., Sullivan’s Landscaping, DRC Electric, Made and Formed Foundations, Vasseur Landscaping, Precision Mechanical, Competitive Edge Coatings, and T/A Engines were on board with making the move.”

With the move back into the SK Modified® division, Sullivan will be hoping to carry over his SK Light success, where he won 5 races in 2 seasons.  Sullivan’s best SK Modified® season was 2012 where he finished 11th in the standings and also recorded his career best finish of third in the season ending Fall Final feature event.  With a new car at his disposal, Sullivan is focused on capturing his first SK Modified® feature victory. 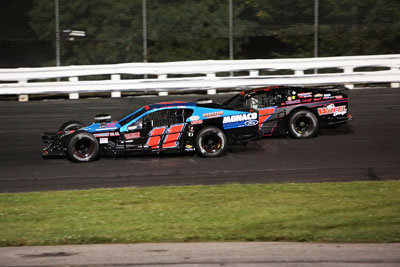 “I raced the 2020 season in Rich Vasseur’s car and then last year I bought a new chassis but we had the same motor,” said Sullivan.  “I know the SK’s are a tough division and it’s probably tougher than anything around, including some of the touring divisions, but I always wanted to go back and see what I could do and with the new car, it was time to give it a try.  We know we’re going back up to the big leagues this year but I wouldn’t be making this move if I didn’t think I had a shot at winning a race.  I’m not going to make any predictions about racing for the championship or anything like that.  I’ve always wanted to get a Stafford SK win and I don’t think that’s out of the equation with the equipment and car that we have. There’s guys that have run in that division for years and haven’t won a race yet so we know it’s going to be tough.”

In addition to Monaco Ford and the host of sponsors on his #46 car, a big piece of Sullivan being able to return to the SK division is thanks to fellow SK Modified® competitor Danny Cates, who will be behind the wheel of the #2 car owned by Steve McCarthy at Stafford and also drive Sullivan’s #46 at Thompson Speedway.

“A big part of me being able to return to the SK Modified® division is Danny Cates and DRC Electric,” said Sullivan.  “Danny has been one of my best friends my whole life and he has a motor from T/A Engines while I have a car and the equipment to get the car to the track every week.  We’re going to combine his engines with my car and equipment and I’m going to run the car at Stafford and I’ll crew chief for Danny to run the car at Thompson this season.” 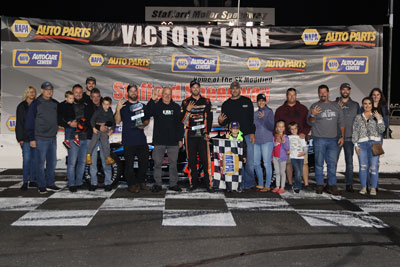 Despite not running in the SK Modified® division since the 2016 season, Sullivan is not concerned about knocking off any rust as he will have his same crew working on the car that he raced to 4 wins last season.  The only difference will be the shocks and engine and Sullivan expects to be able to have speed in his #46 car.

“I think we really had the car figured out the last 5 races of last season and even though it’ll be a totally different engine and shock combination in the SK’s, we have a lot of confidence in the car going into this season,” said Sullivan.  “There’s definitely a lot of setup notes that we can carry over to the SK car from the SK Lights.  We’ll be ahead of where we would have been by not racing the last couple of years so it should just be a matter of the competition level.  I had a lot of fun in the SK Lights but I want to run with the best of the best and that’s what we’ll be doing this season in the SK division.  My big thing right now is to be the most competitive that we can be and I’m expecting to run good.”

Sullivan will hit the track for the first time on Sunday, April 24 as part of NAPA Spring Sizzler® Weekend.  Tickets for the 50th running of the NAPA Auto Parts Spring Sizzler® are now available at staffordspeedway.com/tickets. The two day event begins Saturday, April 23rd with the NAPA Auto Parts Duel, two 40-lap qualifying races that will set the field for the 50th NAPA Spring Sizzler scheduled for April 24th. The PASS Super Late Models and all 5 of Stafford’s weekly divisions as well as the Vintage All-Stars will also be on hand for the weekend.