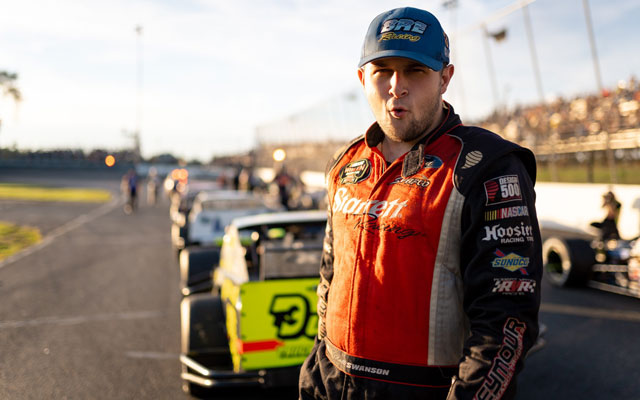 “Our chances are always good when we come to the track with Gary’s #25 Mod Open car,” said Swanson.  “I’ve really had some good runs with Gary at Stafford but it seems like every time something happens.  We go good until the finish and then we get in a wreck or something happens to us.  I know we’ll have a good car because we’ve been fast every time we’ve been to Stafford. We just have to put all the pieces of the puzzle together and be there for the end of the race.  I’m going to run Tommy [Bolles’] SK car all season.  I don’t come to the track unless I feel like I have a chance to win.  Tommy is definitely giving me the best equipment to try to win races.  We don’t go to the track to finish second, we want to win so that’s what we’re going to try to do.  I have to thank the crews from both cars, Gary’s guys and Tommy’s guys, Ceravolo’s Auto is helping us out big time this year and Pettit for the power for both cars.  There’s so many sponsors on both cars I could be here for 45 minutes listing them all but they all know who they are and thanks to them because we couldn’t do this without their support.”

The pairing of Swanson with Casella dates back to the 2019 and 2020 seasons where Swanson drove the #25 in five Open Modified races with a best finish of second in 2019.  Swanson’s prior experience with the Casella team should help the duo avoid any new driver/team misfortune.

“We ran the open 80s two years ago with Gary’s team,” said Swanson.  “Every time I drive for Gary I know I have a good chance to win.  He brings a solid car to the track every race and I’m looking forward to it.  I’ve been stopping by the shop a couple times a week to get the car put together and make sure we’re as ready as we can be for the Sizzler so we can go out and try to win the race.”

In order to win the 50th Annual NAPA Spring Sizzler®, Swanson will first have to qualify the #25 car in a qualifying format that will be unique to him and just about everyone else in the field.  There will be two 8-lap heat races to set lineups for two 40-lap NAPA Duel Races, which will set the field for the main 100-lap event.  There will also be two last chance qualifying races to earn a starting position in the race.

“It’s definitely going to be different from anything I’ve ever done before,” said Swanson.  “I’ve never run a heat race that long before.  With the duel races, it’s all going to come down to where you start and how the race goes.  It’s so hard to come up with a strategy before you get to the track because you never know what’s going to happen.  The race itself is kind of just a typical 100 lap race, you save your stuff and make sure you’re there at the end so you can go to the front when it comes time.  I’m going into it open minded but at the same time we’re going to have the same goal we always have and that’s to win the race.”

In addition to the minimum guaranteed winner’s purse of $15,000 and the $4,000 in winner’s purse in the Duel, another guarantee from winning the NAPA Spring Sizzler® will be a starting position in the SRX race that will take place on Saturday, July 2.  Swanson acknowledges that as a huge opportunity, but an opportunity that he is trying to not think too much about.

“That’s one of those things that I’m going to try to not pay any attention to,” said Swanson.  “When you have something big like that on the line, it tends to get in your head and make you do something stupid.  My approach will be to treat the race just like a normal Friday night race with the SK car and I have one goal and that is to win.  It would be really cool if I was able to get the opportunity to race with the SRX Series and try to back up what Doug [Coby] did last year.” 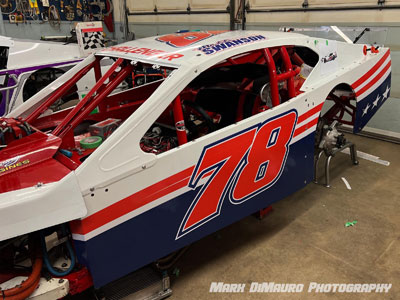 While Swanson has prior experience with the Casella team, Swanson also teamed up with Bolles’ SK Modified® team for the final two races of the 2021 season in preparation for a full 2022 schedule.

“We’re going for the full season in the SK,” said Swanson.  “I’ve been a Tour driver the last couple years so I’ve been used to 150 lap races at different tracks and running the two races last year helped put me back in the mindset right from the drop of the green flag, taking no prisoners and going as hard as you can every lap.  It helped me to be ready for what to expect at the first race this season and I’m really excited to be an SK driver now.”

Although it was a small sample size of only two races, Swanson got a taste of just how competitive the SK Modified® division can be.

“Racing the SK is a totally different animal,” said Swanson.  “With the Tour, you’re racing against the best of the best Tour drivers but when you’re racing against guys like Keith [Rocco], Todd [Owen], and Ronnie [Williams] who have been at Stafford for years on end, they’re masters of Stafford.  I’m going to have to learn how the track changes during the summer months and then when it cools off in the fall.  I’m just going to go out there and do what I try to do every week and that’s win.”

Tickets for the 50th running of the NAPA Auto Parts Spring Sizzler® are now available at staffordspeedway.com/tickets. The two day event begins Saturday, April 23rd with the NAPA Auto Parts Duel, two 40-lap qualifying races that will set the field for the 50th NAPA Spring Sizzler scheduled for April 24th. The PASS Super Late Models and all 5 of Stafford’s weekly divisions as well as the Vintage All-Stars will also be on hand for the weekend.