(Stafford Springs, CT) – Stafford Speedway is proud to announce a new multi-year partnership with Monaco Ford beginning with the 2022 race season. Monaco Ford will serve as official sponsor of the Monaco Ford Safety Team supplying two Ford Trucks to the team. In addition, the Glastonbury CT based Monaco Ford will join the weekly contingency program with a $125 weekly bonus awarded to the winner of the SK Light Modified feature.

“We are serious race fans and car enthusiasts,” explained Mike Monaco, fourth generation co-owner of Monaco Ford. “We are really excited for this opportunity to partner with Stafford Motor Speedway and the Arute family. It’s cool that both of our businesses are multi-generational, Arute’s 3rd generation and us fourth generation, being able to work together. It’s pretty rare for family businesses to survive as long as ours have.” 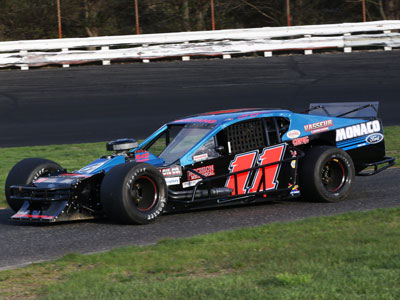 Monaco Ford has long been involved in racing at Stafford Speedway and throughout New England, including serving as primary sponsor of 2020 SK Light Champion Brian Sullivan. Sullivan is set to transition to the SK Modified® division in 2022 and with Monaco Ford on the car.

“Racing in our family goes back to the 40s with my Great-Uncle Sonny,” continued Monaco. “My dad [Dave] raced at Stafford in the 1970s and 1980s. I’m friends with many drivers and we have sponsored many cars over the years. My Dad, Chrissy, and I are really proud to be affiliated with such a well  respected track. Not only are drivers and teams a main focus, but the clientele and demographic at Stafford coincide with our business, and this partnership will help us introduce the race fans to Monaco  Ford and our offerings.”

Stafford Speedway’s Monaco Ford Safety Crew will be outfitted with two 2022 Ford Trucks to service all the on track action throughout the upcoming race season. With locations in Glastonbury and Niantic, CT, Monaco Ford is your destination when in the market for a new or used vehicle. Race fans can visit monacoford.com to learn more and see the current truck, car, and van inventory.

“We’ve been excited about this partnership since the moment it came together a few months ago,” explained Stafford Speedway GM David Arute. “The Monaco Ford brand is well known throughout Connecticut and should be your first stop when in the market for a new vehicle. Mike, Chrissy, and Dave [Monaco] are all big supporters and fans of short track racing and we are honored to have them as a partner for 2022 and beyond.”

Monaco Ford opened its doors in 1922 as Monaco’s Garage and since then has been owned and operated by four generations of the Monaco family. It all started with Peter Monaco, selling all makes of vehicles and was licensed to work on horse and carriages. As the business began to grow, Peter’s sons Sonny, Albie, Johnny, Billy, & Charlie were all actively involved, officially becoming a Ford Dealership in 1957. In 1972, Charlie’s son, David Monaco, became involved in the business full time and was named president of the company in 1988. David has grown the business tremendously and helped put Monaco Ford on the map as a top-level Ford Dealership in New England. As his children grew up in the dealership, David taught Chrissy and Mike how to run the business, how to treat customers, and how to make a positive impact on the community. Now 100 years since opening, Monaco Ford is co-owned by its fourth generation, siblings Chrissy and Mike Monaco.