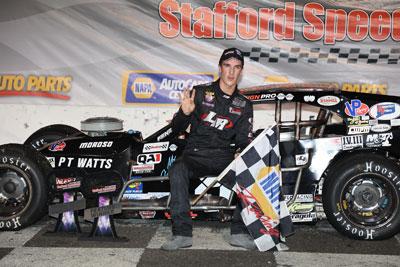 In the 40-lap SK Modified® feature event, Michael Gervais, Jr. took the lead at the drop of the green flag with Michael Christopher, Jr. quickly taking second.  Tyler Leary was third in the early running with Keith Roccofourth and Ronnie Williams and Anthony Bello side by side for fifth place.  Christopher took the lead from Gervais on lap-3 while Rocco took third from Leary.  Bello followed him by Leary to take fourth place on lap-5 with Leary now in a wheel to wheel duel with Williams for fifth place.  Just behind them, Cory DiMatteo and Todd Owen were side by side for seventh and Bryan Narducci and David Arute were side by side for ninth.  Jimmy Broderick hit the turn 1 wall to bring the yellow and red flags out with 7 laps complete.

On the restart, Christopher’s car lost its air cleaner with the debris on the track bringing the caution right back out.  Christopher had to come to pit road to reattach the air cleaner, which handed the race lead back to Gervais with Rocco beside him for the restart while Christopher rejoined the field at the rear.

Rocco took the lead from Gervais on the restart while both Bello and Williams went by Gervais to take second and third.  Cory DiMatteo came to a stop in turn 2, which brought the caution flag back out with 8 laps complete.

Rocco and Williams went wheel to wheel for the lead on the restart with Bello nearly going 3-wide but falling back into third.  Rocco got clear of Williams on lap-10 while Bello took second from Williams on lap-11.  Owen followed Bello by Williams to take third and drop Williams back to fourth just before the caution came back out with 11 laps complete for a spin in the middle of turns 3+4 by Dylan Kopec that collected the cars of Anthony Flannery and Curt Brainard.  R.J. Marcotte was sent to the rear of the field by Stafford officials for making contact with Kopec.

Back under green, Rocco took the lead with Bello glued to his back bumper in second.  Owen got by Williams to take third with Narducci and Williams side by side for fourth place.  Bello made a strong move in turn 3 to take the lead from Rocco on lap-13 just before Marcotte spun in turn 2 to bring the caution back out with 13 laps complete.

Bello took the lead on the restart with Rocco taking a look for the lead before slotting back into second behind Bello.  Owen and Narducci were wheel to wheel for third with David Arute in fifth, just in front of Williams in sixth.  Teddy Hodgon spun on the backstretch and Troy Talman’s car came to a stop in turn 3 to bring the caution back out with 16 laps complete.

Back under green, Bello took the lead with Rocco in second.  Owen and Narducci were once again wheel to wheel for third with Arute in fifth and Gervais in sixth.  Owen took third from Narducci on lap-19 and Narducci slid back to fifth as he got loose in turn 2 and allowed Arute to take fourth.  The caution came back out with 19 laps complete as Curt Brainard got into the frontstretch wall and collected Mikey Flynn, Marcotte, and several other cars.

Bello took the lead on the restart with Owen getting to the inside of Rocco in a duel for second.  Narducci was fourth behind Rocco and Owen with Arute in fifth.  Tyler Leary appeared to lose an engine in turn 2 as Hodgdon spun to bring the caution back out with 21 laps complete.

Bello took the lead back under green with Rocco now getting to the inside of Owen in a fight for second.  They touched coming off turn 4 on lap-22 and got out of shape but both cars were abel to save their cars with Owen maintaining second while Rocco slid back to fifth as Owen went to second, Christopher to third after his earlier mishap, and Narducci fourth.  Christopher made a move to the inside of Owen on lap-26 to take over second while Rocco got clear from Arute in the fight for fifth place.  Rocco got around Narducci to take over fourth on lap-30 and Arute nearly took fifth from Narducci, but he fell back into line behind Narducci as Bello continued to hold the lead with Christopher in second and Owen in third.

Rocco took third from Owen on lap-37 and that move allowed Narducci to pull alongside Owen in a fight for fourth place.  Christopher couldn’t get close enough to Bello to make a bid for the lead as took the checkered flag.  Following a post-race video review, Bello was found to be in violation of Stafford Motor Speedway General Rule You may not check your car or work on it in Victory Lane.  Nothing may be put in or taken out of the race car while it is in Victory Lane, on its way to the scale inspection area, or on its way to technical inspection and he was disqualified from the feature finish.  Bello’s disqualification handed the race win to Christopher, with Rocco, Narducci, Owen, and Arute rounding out the revised top-5. 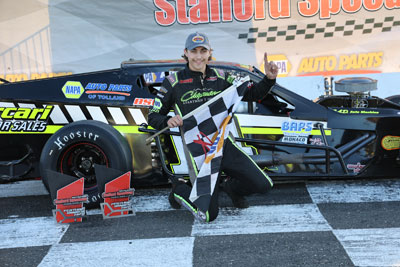 In the 20-lap SK Light feature event, Steven Chapman took the lead at the green while Todd Clark spun but was able to get going and the race stayed green.  Nick Anglace was second behind Steven Chapman with Tony Membrino, Jr. third, Jason Chapman fourth, and Ron Midford, Jr. in fifth.

Membrino took second from Anglace and Midford got around Anglace to move into third place on lap-9 with Anglace slotting into fourth, just in front of Jason Chapman while Steven Chapman was comfortably out front.

Steven Chapman cruised to a wire to wire victory with Midford, Anglace, Jason Chapman, and Membrino rounding out the top-5. 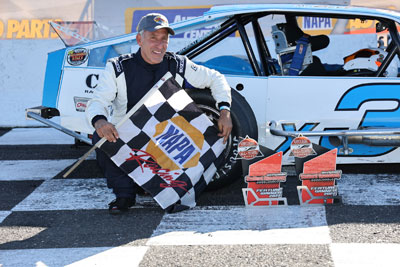 In the 15-lap Vintage All-Stars feature event, Tony Ferrante, Jr. led the field to the green and he took the early lead with Paul Suprenant, Ben Levangie, Boots Jasinski and Tom Pickerel lined up behind him.  Levangie took second place from Suprenant on lap-2 and Jasinski got around Suprenant on lap-3 to move into third and drop Suprenant back to fourth with Pickerel still running in fifth place as Ferrante continued to hold the lead.

Levangie couldn’t get close enough to Ferrante to make a bid for the lead as Ferrante led from start to finish to take the victory.  Jasinski finished third with Suprenant and Gagner rounding out the top-5.