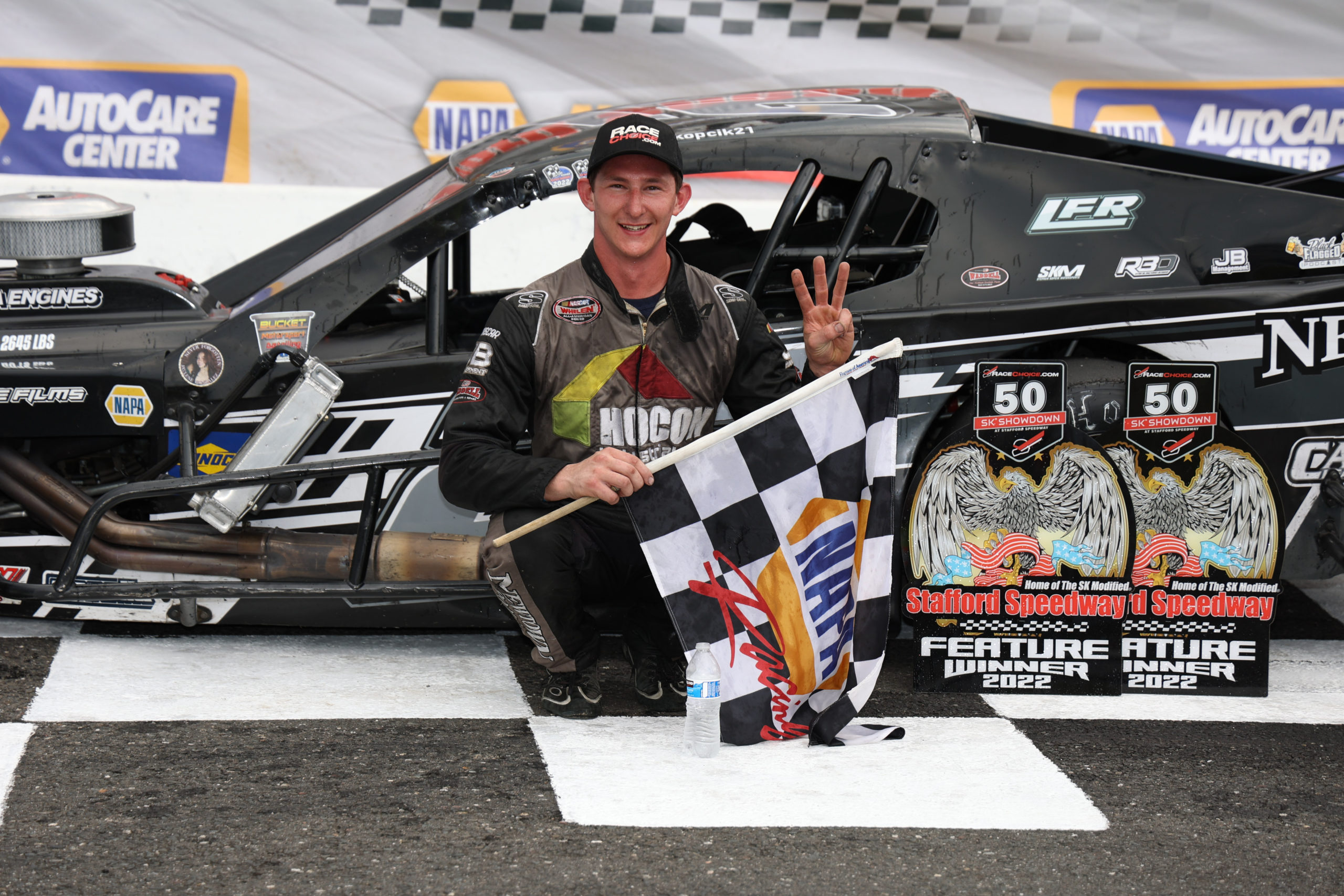 (Stafford Springs, CT)—Stafford Speedway played host to the RaceChoice.com SK Modified® Showdown as part of the Superstar Racing Experience event held Saturday night, July 2nd.  Stephen Kopcik took the lead on a late restart and led the field to the checkered flag to pick up his third win of the 2022 season.

The 50-lap TickMike.com SK Modified® All Star Shoot Out took the green flag with Jon Puleo leading the field but he would only lead the first lap as Michael Christopher, Jr. streaked into the lead on lap-2.  Puleo settled into second behind Christopher with Anthony Bello in third.  The caution came out with 5 laps complete for a spin by Nick Halkowicz in turn 4.

Back under green, Christopher held the lead with Puleo in second.  Marcello Rufrano was side by side with Bello for third before he moved by both Bello and Puleo on lap-9 to move into second.  Todd Owen was on the charge as he took third behind Rufrano to drop Puleo back to fourth, just in front of Bello in fifth.

Ronnie Williams dropped off the pace on lap-11 and brought his car to pit road as Rufrano moved by Christopher on lap-14 to take over the lead.  Owen moved up to second behind Rufrano with Christopher, Puleo, and Bello making up the top-5.  Owen made a move to the inside of Rufrano on lap-20 to take over the race lead.  At the halfway point of the race, Owen was in command followed by Rufrano, Christopher, Bello, Puleo, David Arute, Stephen Kopcik, Dan Wesson, Cory DiMatteo, and Keith Rocco.

Owen was starting to stretch out his lead over Rufrano and the rest of the field as the race hit the lap-35 mark.  The caution came back out with 39 laps complete for spins in turn 4 by Curt Brainard and Wesley Prucker.

Back under green, Owen took the lead with Bello pulling to the inside of Rufrano in a fight for second.  Puleo was fourth with Kopcik in fifth.  The caution came back out with 42 laps complete for a spin in turn 1 by Michael Gervais, Jr.

Owen again took the lead on the restart with Rufrano now on the inside of Bello for second.  The caution came back out after 1 lap for a spin by Mikey Flynn in the middle of turns 1+2.

Owen was again the leader back under green with Rufrano, Kopcik, and Bello all lined up behind Owen.  Owen got out of shape n lap-45 as Rufrano moved ot the lead, Kopcik to second, and Bello to third as Owen fell back to fourth.  The caution came back out with 45 laps complete for a multi-car incident in turn 4 involving the cars of Arute, Puleo, Noah Korner and several others.

Rufrano and Kopcik went wheel to wheel for the lead on the restart with Owen and Bello side by side for third.  Kopcik got clear to the lead on lap-48 with Owen and Rufrano now side by side for second.  Owen took second as the cars hit the white flag with Dana DiMatteo taking fourth from Bello.  Kopcik led Owen to the checkered flag to pick up his third win of the 2022 season.  Rufrano finished third with Dana DiMatteo and Bello rounding out the top-5.