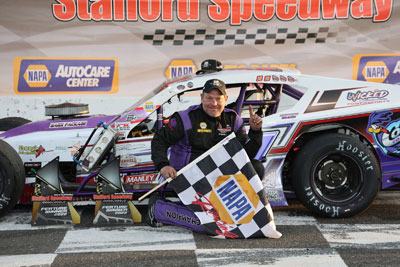 In the 40-lap SK Modified® feature event, David Arute brought the field to the green and he led the first two laps of the race before Todd Owen went to the point on lap-3.  Ronnie Williams was on the move in the early laps, going from seventh up to third behind Owen and Arute with 5 laps complete with Michael Christopher, Jr. in fourth and Bryan Narducci in fifth.  Marcello Rufrano got into the turn 2 wall to bring the caution out with 7 laps complete.

Back under green on lap-8, Owen took the lead with Williams and Arute side by side for second.  Williams took second on lap-9 and he took the lead from Owen on lap-11.  Arute was now alongside Owen for second with Narducci in fourth and Stephen Kopcik up to fifth.  Narducci nearly made a pass on Arute for third on lap-14 but he was abel to make the pass on lap-15.  At the front, Owen was applying heavy pressure to Williams but Williams was able to hold Owen’s challenges off.  The top-7 cars were lined up in a train with Williams leading Owen, Narducci, Arute, Kopcik, Christopher, and Tyler Hines when the caution flew with 18 laps complete as Michael Gervais spun coming out of turn 4.

Williams maintained the lead by a nose on the lap-19 over Owen with Narducci third, Kopcik fourth, and Williams fifth.  The caution came back out with 22 laps complete as Dan Wesson made contact with Arute and climbed over Arute’s car, which collected several other cars.

Williams and Owen went back side by side for the lead on the lap-23 restart but the field only completed one lap before the caution came back out for Andrew Molleur, who came to a stop against the turn 4 wall.

Owen took the lead on the lap-24 restart with Williams taking second.  Narducci took third from Kopcik just before the caution came out with 25 laps complete for a spin that collected the cars of Tyler Hines, Christopher, and Gervais.

Owen again took the lead on the restart with Narducci and Williams side by side for second.  Narducci took second on lap-27 with Blewett taking third to drop Williams back to fourth, just in front of Kopcik in fifth place.  Owen held the lead until lap-34 when Narducci took over the top spot.  Blewett continued in third with Williams in fourth and Kopcik in fifth.  Teddy Hodgdon spun in turn 4 to bring the caution back out with 36 laps complete.

Narducci and Owen went wheel to wheel on the restart with Blewett and Williams wheel to wheel behind them for third.  Narducci got clear of Owen as the field came to the white flag but in turn 2 Blewett spun, which collected Matt Swanson and Joey Ternullo, Jr. to bring the caution out and set up a green white checkered finish.

Owen took the lead on the outside of Narducci by a nose as they came to the white flag.  The two cars ran side by side and they were still side by side coming to the checkered flag with Owen beating Narducci by inches at the line to take the victory.  Williams finished third with Dan Wesson and John Montesanto rounding out the top-5. 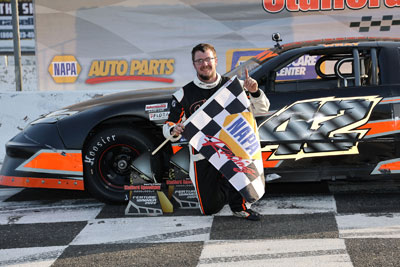 In the 30-lap Late Model feature, Tom Fearn took the lead from Adam Gray at the start of the race and led the first lap, but coming off turn 4 on lap-2, Fearn did a four wheel drift and slipped back to fifth place as Gray took the lead followd by Michael Wray, Michael Bennett, and Kevin Gambacorta.  The caution came out with 3 laps complete for Jim Mavlouganes, who came to a stop against the wall with a flat right front tire.

On the restart, the cars of Gambacorta and Andrew Molleur both spun in turn 3 to bring the caution flag right back out before a lap could be completed.  Gray and Wray stayed side by side for a lap before Gray got clear into the lead on lap-5.  Wray held off Michael Bennett to slot into second place with Fearn fourth and Wayne Coury, Jr. in fifth.

Bennett made a move to the inside of Wray on lap-8 to move into second and Fearn followed him by Wray on lap-9.  Just as Fearn made the move on Wray, Coury shot to the inside of Fearn to take third and drop Fearn back to fourth as Bennett was now looking to take the lead from Gray.  Bennett worked his way to the inside of Gray coming around turn 4 to complete lap-11 but the two cars touched and spun, which also collected the car of Coury to bring the caution out.  This put Fearn and Darrell Keane on the front row with Michael Wray and David Wray making up the second row for the restart.

On the restart, Keand and Fearn touched with Keane spinning in front of the field and collecting several cars including Mike Mordino and Marc Curtis to bring the caution back out before a lap could be completed.

Fearn took the lead on the next restart with Michael Wray and Dave Wray behind him.  Paul Arute was now up to fourth place with Chris Meyer in fifth.  Bennett was back up to sixth and he took fifth from Meyer on lap-13 and he continued his climb back to the front by getting by Arute to move into fourth place on lap-15 as Fearn continued to lead the race.

Bennett took third from Dave Wray on lap-17 as Wray got out of shape coming out of turn 2 and fell back to seventh place as Arute took fourth, Blake fifth, and Keane sixth.  Wray took the lead from Fearn on lap-19 after the two leaders nearly spun in turn 4 as they came off turn 4 to complete lap-18.  Bennett took second from Fearn on lap-20 and began to chase down Michael Wray in the lead.

Blake took third from Arute on lap-24 with Keane and Dave Wray right behind Keane while Michael Wray continued to lead Bennett although Bennett had closed the gap down to several car lengths with 5 laps to go in the race.

Bennett closed to within a car length but he couldn’t get any closer as Michael Wray took down his first feature win of the season.  Blake finished third with Arute and Keane rounding out the top-5. 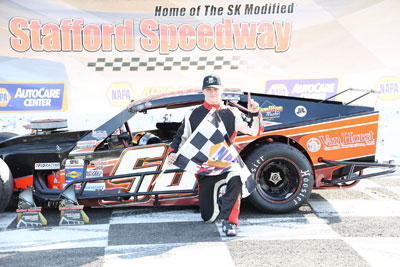 In the 20-lap SK Light feature event, Alexander Pearl took the lead at the green flag with George Bessette, Jr. taking second.  Tyler Chapman moved into third on lap-2 with Bob Charland in fourth and Chris Matthews in fifth.  On lap-6 Bessette was starting to hound Pearl for the lead while Matthews got around Charland to move from fifth to fourth place.

At the halfway point, Pearl still held a narrow lead over Bessette with Chapman in third, Matthews in fourth and Derek Debbis, who got around Charland, in fifth.

Pearl and Bessette touched and spun in turn 3 as the two leaders attempted to go 3-wide to pass a lapped car to bring the caution out with 13 laps complete.  This put Chapman into the lead and Debbis into second for the upcoming restart with Matthews and Charland on row 2.

Chapman and Debbis raced wheel to wheel with Debbis taking the lead by a nose at the line on the restart.  Debbis cleared Chapman on lap-15 with Matthews, Charland, and Norm Sears making up the top-5.  Sears made a move to get by Charland on lap-19 to take fourth place.  It was all Debbis as he led Chapman to the checkered flag to pick up his first win of the 2022 season.  Matthews, Sears, and Charland rounded out the top-5.

In the first 15-lap NAPA Spring Sizzler® Last Chance Qualifier, Patrick Emerling led the field to the green flag and took the lead but going into turn 3 on the first lap, he got loose and fell back to fourth place as Jack Ely took the lead with Anthony Nocella in second and Eric Goodale moving up to third.  Bobby Santos, III was right behind Emerling and had to get on the brakes and fell back several positions before his car slowed to a crawl on lap-4 and eventually came to a stop on the entrance to pit road to bring the caution out with 5 laps complete.

Nocella took the lead from Ely on the lap-6 restart with Emerling in third, and Eric Goodale holding off a host of cars for the fourth and final transfer spot.  Craig Lutz took fourth from Goodale on lap-8 to drop Goodale back to fifth, just in front of Mikey Flynn.

Nocella led Ely to the checkered flag to pick up the win with Emerling and Lutz filling out the top-4 cars to transfer into the 100-lap NAPA Spring Sizzler®.  Goodale finished fifth followed by Dave Etheridge, Flynn, Robert Bloxsom, III, and Santos.

In the second 15-lap NAPA Spring Sizzler® Last Chance Qualifier,  Noah Korner spun in turn 1 on the first lap which collected the car of Keith Rocco to bring the caution out before the first lap could be completed.

Anthony Bello charged his way into the lead on the restart with Buddy Charette taking second.  Jeff Gallup quickly worked his way into third with Brian Robie in fourth and David Arute in fifth.  Korner took fifth from Arute on lap-4 and that allowed Tommy Barrett, Jr. to follow him by and drop Arute from fifth back to seventh as Bello continued to lead Charette, Gallup, and Robie.  Korner continued to work his way back towards the front as he took fourth place from Robie on lap-7.  Arute spun coming out of turn 4 to bring the caution out with 11 laps complete.

Bello took the lead on the lap-12 restart with Charette, Gallup, and Korner making up the top-4 qualifying spots.  Robie was fifth with Arute and Todd Owen rounding out the field.  Bello led Charette to the checkered flag with Gallup and Korner the transfer cars into the 100-lap NAPA Spring Sizzler®.