(Stafford Springs, CT)—Stafford Speedway hosted the biggest and richest SK Modified® race of the 2022 season on Friday, August 5 with the 9th Annual NAPA Auto Parts SK 5k.  A draw just prior to the start of the race determined the feature distance would be either 60, 70, or 80 laps and the 80 lap number was drawn by NAPA rep Bruce Pinto.  Marcello Rufrano scored his first career SK Modified® victory in the biggest race of the season.  Rufrano’s win gave him a payday of $5,725 in purse and contingency money from total posted awards of over $35,000.  Other feature wins on the night were scored by Tom Fearn in the Late Model feature, Tyler Alkas in the SK Light feature, Jeremy Lavoie in the Limited Late Model feature, and Travis Downey in the Street Stock feature. 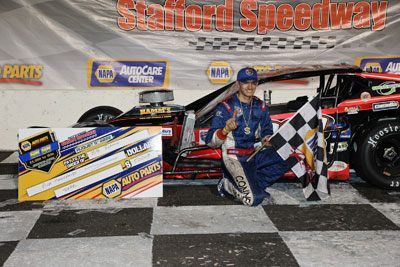 In the 80-lap NAPA Auto Parts SK 5K feature event, Jon Puleo took the lead at the start of the race with Dan Wesson taking second.  Mikey Flynn was third followed by Cory DiMatteo and Michael Christopher, Jr.  Christopher went around DiMatteo to take fourth on lap-4with Marcello Rufrano taking fifth to drop DiMatteo back to sixth as up front, Wesson took the lead from Puleo on lap-5.  Flynn moved up to second with Flynn third as Puleo slid back to seventh place.  Ronnie Williams was fourth with Todd Owen in fifth and Stephen Kopcik up to sixth.

Rufrano took the lead from Wesson lap-12 with Williams and Flynn side by side for third, just in front of fifth place Owen.  The caution flag flew with 14 laps complete for DiMatteo, who came to a rest against the turn 2 wall.

Rufrano charged into the lead on the restart with Wesson in second.  Owen went by Williams on lap-18 to move into third with Flynn holding the fifth position.  The caution came back out with 22 laps complete for spins on the backstretch by Noah Korner and R.J. Marcotte and a spin in turn 4 by Williams.

Rufrano continued to hold the lead on the restart but the caution came back out for a multi-car incident in turn 1 with 24 laps complete when Stephen Kopcik and Wesson touched wheels, which sent Wesson into the turn 1 wall and collected the car of Flynn as well as several others.

Rufrano held off a challenge from Owen on the restart to maintain the lead.  Keith Rocco was now up to third behind Rufrano and Owen with Puleo  in fourth and Christopher and Arute dueling for fifth place.  Arute took to the high groove to get by Christopher and take over fifth place on lap-28 while Owen was applying heavy pressure to Rufrano for the lead.  Owen was finally able to make a pass on Rufrano to move into the lead with a pass coming out of turn 4 on lap-33.  The caution came back out with 36 laps complete as Korner got into the turn 1 wall.

Rufrano took the lead from Owen on the restart with Rocco moving into second.  Owen was locked in a side by side duel with Puleo for third with Tyler Hines up to fifth place.  With 50 laps on the board, Rufrano continued to hold the race lead with Rocco still in hot pursuit.  Owen was third in line with Hines fourth and David Arute in fifth.  Anthony Bello was in sixth place, followed by Puleo, Andrew Molleur, Michael Gervais, Jr., and Anthony Flannery.

With 20 laps to go, the top-5 remained the same with Rufrano having stretched out his lead over Rocco to several car lengths.  Owen took second place from Owen on lap-68 but he was 1.5 seconds behind Rufrano in the fight for the lead.  Owen couldn’t close the gap to Rufrano over the final 12 laps as Rufrano scored his first career SK Modified® victory in the biggest race of the season.  Rocco finished third with Hines and Arute rounding out the top-5. 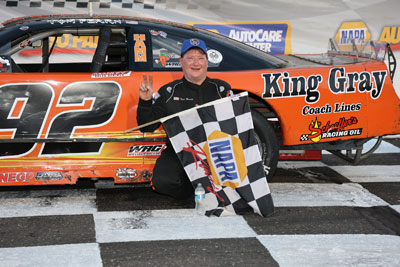 In the 30-lap Late Model feature event, Paul Arute, Adam Gray, and John Blake all got into the turn 1 wall right at the start to bring the caution flag out before a lap could be completed.

Wayne Coury, Jr. took the lead on the restart with Michael Wray and Andrew Durand going door to door for second.  Tom Fearn was fourth in line followed by the side by side duo of Paul Varricchio, Jr. and Kevin Gambacorta.  Fearn took second on lap-4 to drop Wray back to third with Varriccho in fourth and  Durand fifth as Coury continued to hold the lead.  Varricchio brought the caution back out with 4 laps complete as he went straight into the turn 1 wall after developing a flat tire.

Fearn took the lead from Coury on the restart with Wray and Durand going door to door for third and Gambacorta in fifth.  Wray cleared Durand to take third on lap-5 with Gambacorta taking fourth on lap-6.  Gray was recovered from his earlier misfortune and he was all over the back bumper of Gambacorta for the fifth position when the caution came back out with 7 laps complete for a spin by Durand in turn 2.

Fearn took the lead back under green with Wray and Gray behind him.  Gambacorta took fourth with Darrell Keane up to fifth.  Andrew Molleur was sixth in line followed by Coury, Paul Arute, Michael Bennett, and Durand.  Gray made a move to get around Wray to take over second place on lap-11 and then had Gambacorta applying heavy pressure to his bumper for third place.  After several laps, Gambacorta was finally able to make a move to get to the inside of Wray and move into third place on lap-18.  Keane and Coury both followed Gambacorta by Wray to take fourth and fifth on and drop Wray back to sixth place on lap-19. 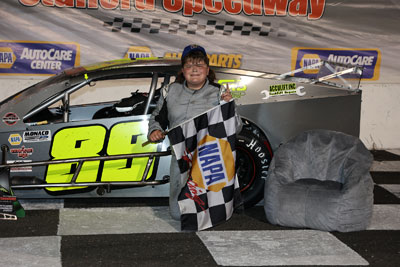 In the 20-lap SK Light feature event, Frank L’Etoile, Jr. took the lead from Brandon Michael at the start and he led the first lap before the caution came out for a spin in turn 2 by Brandon Hunt.

L’Etoile took the lead on the restart but Tyler Alkas took the lead from L’Etoile on lap-3.  Michael was third in line with Chris Matthews in fourth,  Cassandra Cole in fifth and Meghan Fuller in sixth.  The positions continued to shuffle behind Alkas, L’Etoile, Matthews, and Michael as Bob Charland took fifth from Amanda West on lap-8 and Derek Debbis was looking to get by both West and Fuller.  Charland got clear into fifth on lap-10 just before the caution flew with 11 laps complete for a spin by Charlie McDougall on the frontstretch.

Alkas again took the lead back under green with Matthews taking second.  L’Etoile was third followed by Charand and George Bessette, Jr.  Bessette took fourth from Charland on lap-14 while Alkas continued to lead Matthews and L’Etoile.  After several laps of trying to make a move, Debbis was able to complete a pass on Charland to move into fifth place on lap-18.  That brought Tyler Chapman up to sixth and Alexander Pearl to seventh as Charland slid back to eighth.  Alkas led the field to the checkered flag to pick up his first career victory.  Matthews finished second with Bessette, L’Etoile, and Debbis rounding out the top-5. 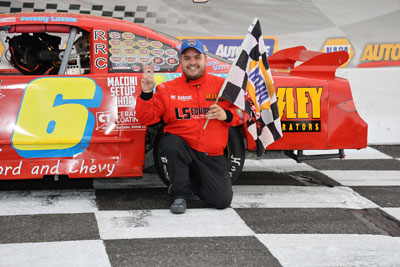 In the 20-lap Limited Late Model feature, Ari Jencik took the lead at the start of the race and she held the lead until lap-3 when Kevin Cormier took over the top spot.  Jeremy Lavoie moved into second with Gary Patnode taking third and Alexandra Fearn fourth as Jencik slid back to fifth in line.  Lavoie made a move to the inside of Cormier on lap-5 to take over the race lead while Rich Hammann took fifth place from Ari Jencik.

At the halfway point of the race, Lavoie was still in command with Cormier, Patnode, Fearn, and Hamman behind him.  Devon Jencik was now sixth followed by Matt Scappini, Jay Clement, Matt Clement, and Ari Jencik.  Lavoie was starting to open up a gap over Cormier in second.  The caution came out with 15 laps complete as Devon Jencik came to a stop on the frontstretch grass and Scappini was limping his way back to pit road with a flat right front tire after the two cars came together and made door to door contact coming out of turn 4.

Lavoie took the lead back under green with Cormier in second.  Patnode was third followed by Fearn and Hammann.  Hammann was looking to take fourth from Fearn on lap-18 but Fearn was able to fend off Hammann’s challenge.  Cormier couldn’t get close enough to Lavoie as Lavoie took down his second win of the 2022 season.  Patnode finished third with Fearn and Hammann rounding out the top-5. 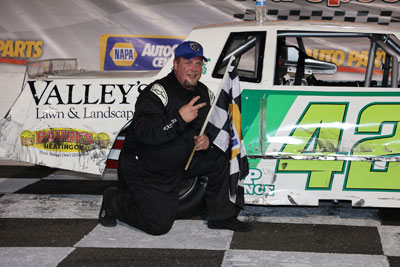 In the 20-lap Street Stock feature, Tyler Trott took the lead at the green flag with Jason Finkbein taking second.  Travis Downey moved into third with Nickolas Hovey in fourth and last week’s winner Bert Ouellette in fifth.  Hovey slid back several spots on lap-2 as Ouellette moved into fourth and Travis Hydar took fifth while Hovey fell back to seventh place behind Adrien Paradis, III.

Finkbein took over the lead on lap-4 with Downey taking second and Ouellette third as Trott slid back to outside of the top-5.  Ouellette brought the caution flag out with 5 laps complete as he got into the turn 1 wall.

Downey nearly took the lead from Finkbein on the restart but he settled back into second place behind Finkbein.  Paradis was up to third, followed by Trott in fourth and the side by side duo of Jason Lafayette and Nickolas Hovey for fifth.  Hovey and Brandon Warren came together with Warren nearly climbing the wall and Hovey spinning around on the backstretch to bring the caution flag back out with 8 laps complete.

Downey was able to stay with Finkbein on the restart and Downey took the lead as they completed lap-9.  Paradis was third with Lafayette fourth and David Macha, Sr. took fifth.  Trott’s car got out of shape but he was able to gather it up and he fell back to seventh place, just behind Pat Grady.  Debris on the frontstretch brought the caution flag back out with 13 laps complete.

Lafayette briefly went 3-wide with Downey and Finkbein for the lead before slotting back into third behind the two leaders.  Lafayette spun in turn 2 on lap-14 as did Bobby Stirk, III, but both cars were able to get moving and the race stayed green.  Paradis was third behind Downey and Finkbein with Trott in fourth and David Macha, Sr. still in fifth.  Downey led the field the checkered flag to pick up his second win of the 2022 season.  Ouellette and Macha, Sr. made contact with each other coming to the checkered flag with Macha’s car flipping over on its roof just short of the start/finish line.  Finkbein finished second with Paradis, Trott, and Hydar rounding out the top-5.