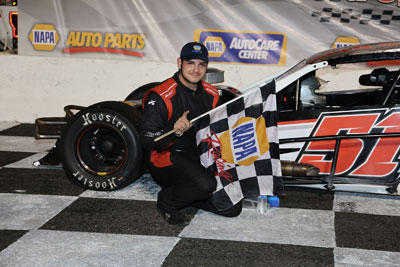 Jon Puleo took the lead on the outside of Gervais on the restart with Andrew Molleur taking second.  Stephen Kopcik took a trip through the frontstretch grass but rejoined at the rear of the field but the caution did come back out with 4 laps complete for a spin in turn 1 by Gervais.

Puleo and Molleur went wheel to wheel for the lead on the restart and with 6 laps complete, Puleo spun in front of the field which collected John Montesanto, Michael Christopher, Jr., Tyler Hines, and Keith Rocco.

Todd Owen shot into the lead on the restart with Marcello Rufrano taking second.  Anthony Bello was third followed by Bryan Narducci and Andrew Molleur.  Rufrano took the lead from Owen on lap-10 with Bello taking second as Owen fell back to third.  Molleur and Narducci were side by side for fourth with Molleur taking the spot.  Bello was applying heavy pressure to Rufrano on lap-19 looking to make a bid for the lead.  Bello was still looking for a way to get by Rufrano with 23 laps complete when the caution came back out for a spin in turn 4 by R.J. Marcotte and Curt Brainard.

With 10 laps to go, Rufrano was still in front followed by Bello, Owen, Molleur, and Kopcik.  Bello took the lead from Rufrano with 5 laps to go with a pass on the backstretch that saw the two cars touch and Rufrano get sideways.  Bello led the field to the checkered flag to pick up his very first SK Modified® win at Stafford.  Rufrano finished second with Owen, Molleur, and Arute rounding out the top-5. 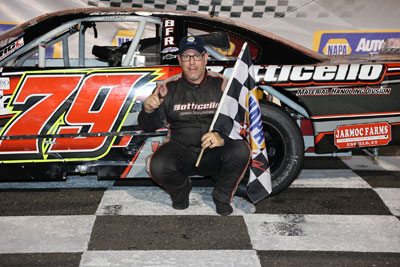 In the 30-lap Late Model feature, Andrew Durand led the field to the green and he led the first lap before the caution flew for a spin in turn 1 by Michael Bennett.

Durand took the lead back under green with Darrell Keane moving into second behind him.  John Blake fell from second back to third with Andrew Molleur in fourth and Tom Fearn fifth.  Keane took the lead from Durand on lap-5 with Durand almost making a crossover move, but Keane was able to maintain the lead.  The caution flew with 6 laps complete for spins on the backstretch by Duane Noll and Adon Burrell.

Keane took the lead back under green with Durand holding second.  Molleur and Fearn were door to door for third with Adam Gray up to fifth behind them.  Fearn and Molleur ran side by side until lap-11 when Fearn was able to get clear into third as Keane was starting to pull away from Durand in second.  Molleur retook third on lap-13 and Gray took fourth to drop Fearn from third back to fifth.  Michael Wray spun in the middle of turns 1+2 to bring the caution flag out with 13 laps complete.

Keane again took the lead on the restart with Molleur taking second from Durand.  Durand began to slide backwards as Fearn took third and Kevin Gambacorta fourth, Gray fifth, and Blake sixth as Durand fell back to seventh place.  Gambacorta took second from Molleur and Gray took third from Molleur on lap-28 but it was all Keane as he took down his first win of the 2022 season.  Gambacorta finished second with Gray, Molleur, and Fearn rounding out the top-5. 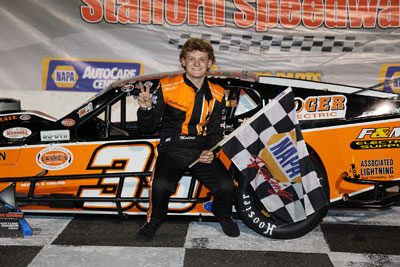 In the 20-lap SK Light feature event, Amanda West took the lead on the opening lap from Cassandra Cole but the caution flew with one lap complete for Josh Carey and Norm Sears, who both got into the wall on the frontstretch.

West and Cole went wheel to wheel for the lead on the restart with Cole holding the lead at the line by a nose.  Frank L’Etoile, Jr. was third with Meghan fuller fourth and Tyler Barry fifth.  The caution came back out with 4 laps complete for a spin in turns 3+4 by Cole.

Tyler Barry took the lead on the restart with George Bessette, Jr. coming up to second.  Derek Debbis took third with West falling from the lead back to fourth, just in front of Jason Chapman and Alexander Pearl.  Joey Ferrigno took a trip through the frontstretch infield but was able to rejoin at the rear of the field and the race stayed green.  With 10 laps complete, the order was Barry leading followed by Bessette, Debbis, West, and Pearl.  The caution came back out with 10 laps complete for a spin coming out of turn 4 by Paul Arcari.

Bessette took the lead by a nose on the restart but the field could only complete one lap before the caution came back out for a spin in turn 4 by Hailey Desaulniers.

Barry took the lead from Bessette on the restart with Bessette and West wheel to wheel for second and Debbis and Tyler Chapman wheel to wheel for fourth.  Bessette cleared into second on lap-14 with Debbis taking third and Pearl fourth as West slid back to fifth while Barry continued to lead the race.  Bessette was beginning to apply heavy pressure to Barry for the lead on lap-16 while Pearl was all over the back of Debbis for third.  Bessette worked his way to the inside of Barry but couldn’t complete a passing move.  The caution came out with 19 laps complete for L’Etoile, who got into the wall coming out of turn 4 and came to a stop on the frontstretch grass.  L’Etoile’s misfortune set up a green white checkered finish with Barry and Bessette on the front row and Debbis and Pearl in the second row.

Barry and Bessette resumed their side by side duel for the lead with Bessette holding the lead by a nose as they took the white flag.  The two leaders continued to run wheel to wheel on the final lap and coming out of turn 4 on the final lap it was a drag race to the checkered flag with Bessette taking the win by a half car length.  Pearl edged out Debbis for third with West rounding out the top-5. 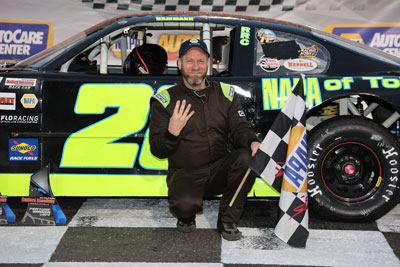 In the 20-lap Limited Late Model feature event, Jay Clement and Kevin Cormier raced door to door for the first lap before Jay Clement got clear into the lead.  Matt Clement was now side by side with Cormier for second with Rich Hammann in fourth and Devon Jencik in fifth.  Matt Clement took second from Cormier on lap-3 and that move allowed Hammann to move into third as Cormier fell back to fourth.

Hammann took second from Matt Clement on lap-7 and he took the lead from Jay Clement on lap-8.  Matt Clement was still third with Cormier in fourth and Alexandra Fearn fifth.  The caution flew with 11 laps complete for a spin by Gary Patnode that collected the car of Damian Palardy.  Devon Jencik was sent to the rear of the field by Stafford officials for making contact with Patnode.

The caution came right back out one lap after the restart for Dave Shinder, who came to a stop with a mechanical issue in turn 2.  Hammann took the lead on the next restart with Cormier moving into second.  Matt Clement held third with Jay Clement in fourth.  Fearn and Jeremy Lavoie were door to door for fifth before Fearn took the spot on lap-16.  Fearn and Lavoie both got around Jay Clement on lap-17 to move up to third and fourth and drop Jay Clement back to fifth as Hammann continued to lead.

Hammann led Cormier to the checkered flag to pick up his fourth win of the 2022 season.  Matt Clement finished third with Fearn and Lavoie rounding out the top-5. 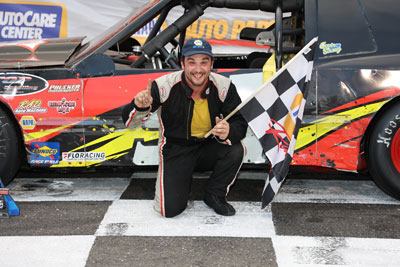 In the 20-lap Street Stock feature event, Marvin Minkler led the field to the green flag and he led the first lap by a nose over Bert Ouellette before the caution flew for a spin in turn 3 by Rob Sears that collected the car of David Macha, Jr.

Ouellette took the lead from Minkler on the restart with Travis Downey going door to door with Minkler for second.  Downey took second on lap-3 with Jason Finkbein moving into third, Travis Hydar fourth, and Tyler Trott fifth as Minkler slid back to seventh, just behind Nickolas Hovey.  Hydar worked his way around Finkbein on lap-5 to take over third place  as Ouellette continued to lead.  The caution came back out with 13 laps complete as Bill Cote spun in turn 1 while Hydar’s car came to a stop in turn 4 with flames showing from the left front of his car.

Ouellette again took the lead on the restart while behind him, Finkbein and Downey were leaning on each other which allowed Jason Lafayette to take over second with Downey falling back to third as Finkbein pulled behind the pit wall and was done for the evening.  Adrien Paradis, III was now in fourth with Brandon Warren in fifth as Ouellette had a comfortable lead over Lafayette and Downey with three laps to go.  Ouellette led Lafayette and the field to the checkered flag to pick up his first win of the 2022 season.  Downey finished third with Paradis and Warren rounding out the top-5.