(Stafford Springs, CT)—Stafford Speedway returned to racing action on Friday, July 8 with the 6th Annual Dunleavy’s Modifiedz Night.  Stafford’s SK Lights took center stage with a 40-lap feature that paid over $10,000 in total posted awards.  Chris Matthews took home the biggest prize of the SK Light season for his second win of the 2022 season after leaders Derek Debbis and Alexander Pearl tangled with 4 laps to go.  Matthews’ victory was worth over $2,000 in purse and contingency money while in victory lane, Doug Dunleavy did his pick from the hat and the 4th and 10th place finishers, Josh Carey and Frank L’Etoile, Jr., each won a $500 bonus while the 7th place finisher, Meghan Fuller, won a $1,000 bonus from Dunleavy’s Truck and Trailer Repair.  Stafford’s other four feature events all featured first time 2022 winners with Tyler Hines winning the SK Modified® feature, Tom Fearn the Late Model feature, Jeremy Lavoie in the Limited Late Model feature, and Adrien Paradis, III in the Street Stock feature. 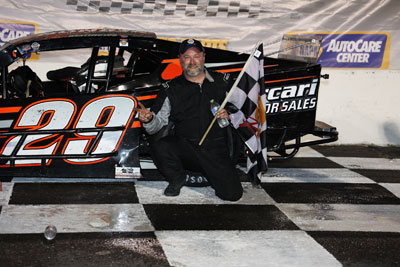 In the 40-lap Dunleavy’s Modifiedz Night SK Light feature event, Joey Ferrigno took the lead from Charlie McDougall at the start of the race with Cassandra Cole coming up to second behind Ferrigno.  Amanda West moved up third with Bob Charland fourth and Derek Debbis fifth as McDougall fell back to eighth place.  Debbis took third from West and then second from Cole on lap-5 and he continued his charge to the front by taking the lead on lap-8.  The caution came out with 8 laps complete as Geoff Nooney, Ed Chicoski, and Anthony Forino all spun coming out of turn 4.

Debbis streaked into the lead on the restart with Cole taking second.  West got by Ferrigno on lap-10 to move into third and Alexander Pearl and Chris Matthews went around Ferrigno to take fourth and fifth on lap-11.  McDougall bounced off the turn 3 wall on lap-12 but he made it back to pit road and the race stayed green.  Pearl took second from Cole on lap-14 with West and Nick Anglace now side by side for fourth with Chris Matthews and George Bessette, Jr. side by side behind them for sixth place.  Anglace took fourth and Matthews took fifth on lap16 with Bessette and West now side by side behind them as Debbis continued to lead the race but Pearl was closing in on his back bumper.  The caution came back out with 18 laps complete for a spin in turn 1 by Brandon Michael.

Pearl took the lead on the restart with Anglace nearly taking second from Debbis in the outside lane.  Debbis and Anglace continued to race wheel to wheel with Bessette up to fourth and Matthews in fifth.  Anglace fell back into line behind Debbis on lap-21.  Cole spun on the backstretch to bring the caution flag back out with 25 laps complete.  Under the caution, Bessette’s car came to a stop on the backstretch and he had to be pushed back to pit road, done for the evening.

Debbis took the lead from Pear on the restart with Matthews nearly going 3-wide for the lead.  Tyler Chapman spun in the middle of turns 3+4 to bring the caution back out with 26 laps complete.

Debbis took the lead on the restart with Matthews briefly taking second but Pearl made a crossover move and the two cars ran wheel to wheel for second.  Pearl got clear of Matthews on lap-29 with Stephen Chapman up to fourth and Anglace in fifth.  With 5 laps to go, it was still Debbis in the lead followed by Pearl, Matthews, Stephen Chapman, and Anglace.  Pearl tried a move to the inside of Debbis for the lead on lap-37 but the two cars touched with Debbis spinning and backing his car into the wall to bring the caution flag out with 36 laps complete.  Pearl was sent to the rear of the field for the contact with Debbis, which put Matthews and Stephen Chapman on the front row for the restart.

Matthews took the lead back under green with Chapman all over his back bumper in second.  Anglace was up to third with Josh Carey up to fourth and Charland in fifth place.  Matthews led Chapman to the checkered flag to pick up his second win of the 2022 season.  Anglace finished third with Carey and Tyler Barry rounding out the top-5. 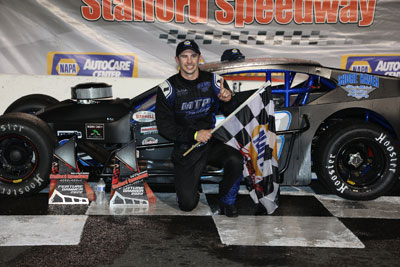 In the 40-lap SK Modified® feature event, Tyler Hines took the lead at the drop of the green and took the early lead with Troy Talman, Cory DiMatteo, Teddy Hodgdon, and Dan Wesson lined up behind him.  DiMatteo was applying heavy pressure to Talman for second on lap-9 while behind them, Wesson moved moved up to fourth with Anthony Bello taking fifth to drop Hodgdon from fourth back to sixth in line.  The caution came out with 13 laps complete as both Hodgdon and Wesson ended up pointed at the turn 4 wall.

Hines took the lead on the restart with DiMatteo and Talman going wheel to wheel for second.  Ronnie Williams was up to fourth with Bryan Narducci up to fifth.  DiMatteo took second with Williams moving into third to drop Talman back to fourth on lap-15.  Narducci was still fifth but he made a move to the inside of Talman to move into fourth place on lap-17 and that move brought Stephen Kopcik up to fifth as Talman slid back to ninth place.  With Williams taking second from DiMatteo, Hines had stretched out his lead but that lead was erased by the caution flag with 23 laps complete for a spin by Noah Korner in turn 4.

Williams nearly took the lead from Hines on the restart but Hines maintained the lead by a nose at the line.  Hines got clear from Williams on lap-25 with DiMatteo in third, Kopcik in fourth, and Narducci in fifth.  DiMatteo made a move to the inside of Williams on lap-27 and he took over second place on lap-28 after two laps of wheel to wheel action.  Kopcik was now side by side with Williams for third but he went by Williams and DiMatteo on lap-30 to move into second place.  Williams and DiMatteo were side by side for third with Williams getting clear on lap-33.  Narducci took over fourth and Todd Owen took fifth as DiMatteo slid back to sixth place with 6 laps to go.

Hines led the field to the checkered flag to pick up his first win of the 2022 season in dominating fashion.  Kopcik finished second with Williams, Narducci, and Owen rounding out the top-5. 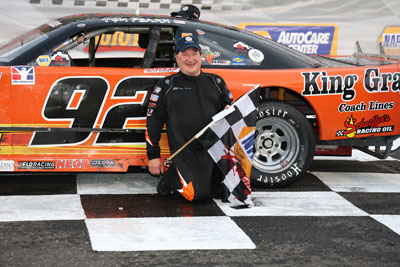 In the 30-lap Late Model feature event, Paul Varricchio, Jr. led the field to the green and he led the first lap before giving way to Paul Arute, who streaked into the lead on lap-2.  Tom Fearn followed Arute by Varricchio to take second with Varricchio settling into third.  Michael Wray was fourth in the early going with Darrell Keane fifth and Adam Gray in sixth place.

Fearn went around Arute on lap-6 to move into the lead.  Varricchio was still third in line with Keane, Gray, and Wray lined up behind him.  At the halfway point of the race, Fearn was still in command with Arute, Keane, and Gray behind him.  Wray was by himself in fifth place with Kevin Gambacorta and Andrew Molleur side by side for sixth place and Varricchio just behind them in eighth place.

Keane and Gray went by Arute to move into second and third on lap-16 with Arute settling into fourth place, just in front of Wray while Fearn was slowly starting to stretch out his advantage over the field.  Gray worked his way up to second in the closing laps but he couldn’t get close enough to Fearn as Fearn scored his first Late Model win at Stafford since May 14, 2021.  Keane finished third with Gambacorta and Wray rounding out the top-5. 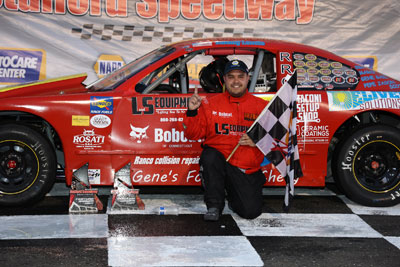 In the 20-lap Limited Late Model feature event, Jay Clement and Kevin Cormier went door to door for the lead at the drop of the green flag with Clement getting clear on lap-2.  Jeremy Lavoie was now door to door with Cormier for second before taking the spot on lap-2.  Matt Scappini was fourth followed by Devon Jencik and Gary Patnode.  Lavoie took the lead from Clement on lap-4 and he was still in the lead when Dana Wray spun in turn 4 to bring the caution out with 9 laps complete.

Lavoie took the lead back under green with Cormier in second.  Scappini came up to third with Devon Jencik fourth and Rich Hammann fifth.  Patnode spun in turn 2 to bring the caution back out with 14 laps complete.

Lavoie took the lead on the restart with Scappini moving into second on lap-15.  Cormier slotted into third behind Scappini with Devon Jencik fourth and Jay Clement in fifth.  Damian Palardy spun in turn 2 to bring out the caution flag with 16 laps complete.

Lavoie again took the lead back under green with Scappini, Cormier, Hammann, and Devon Jencik lined up behind him.  Jay Clement’s car dropped off the pace and he limped his way back to pit road, done for the evening.  Lavoie led Scappini to the checkered flag to pick up his first win of the 2022 season.  Hammann finished third with Cormier and Devon Jencik rounding out the top-5. 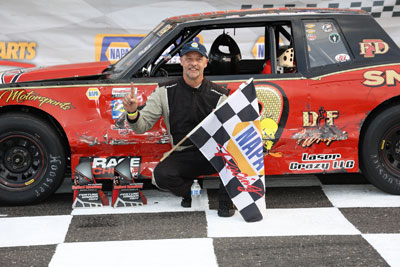 In the 20-lap Street Stock feature event, Chris Danielczuk led the field to the green and he held off a challenge from Bill Cote on the opening lap to take the early lead.  Cote stayed glued to the outside of Danielczuk with Johnny Walker in third, Adrien Paradis, III in fourth and Marvin Minkler in fifth.  Paradis quickly made a move on lap-3 to move up to third with Bert Ouellette moving to fourth and Nickolas Hovey taking fifth while Cote went by Danielczuk to take over the race lead.

Danielczuk slid backwards to outside the top-10 over the next several laps while Paradis was now up to second behind Cote on lap-7 and he was followed in line by Hovey, Ouellette, and Bobby Stirk, III.  Paradis made a move to the inside of Cote in turn 3 on lap-8 to move into the lead.  Brandon Warren spun in turn 4 to bring the caution out with 9 laps complete.

Paradis took the lead on the restart with Hovey taking second.  Ouellette went to the outside of Cote to move into third with Travis Downey moving into fourth and Travis Hydar taking fifth as Cote slid back outside the top-10.  Downey took third on lap-11 with Hydar moving up to fourth as Ouellette fell back to fifth, where he was getting heavy pressure from Stirk while Paradis continued to lead with Hovey in second.

Tyler Trott worked his way past Stirk on lap-15 to move into fifth place while Hovey was looking to get close enough to Paradis to make a bid for the lead.  Hovey couldn’t get close enough to make that move as Paradis took down his first win of the 2022 season.  Downey finished third with Hydar and Trott rounding out the top-5.