(Stafford Springs, CT)—Stafford Speedway returned to racing action with a Weekly Series program on Friday, June 17th.  Rich Hammann was the winner of the extra distance Limited Late Model feature event for his third win of the season.  There were two consecutive race winners tonight with Adam Gray nailing down his third consecutive Late Model win and Alexander Pearl took down his second consecutive SK Light victory.  Cory DiMatteo held off a determined charge from Bryan Narducci to score his first SK Modified® win of the season and Nickolas Hovey reigned in the Street Stock feature for his first win of the season. 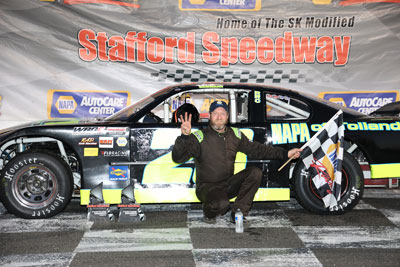 In the extra distance 25-lap Limited Late Model feature event, Jay Clement took the lead at the green and he led the first 3 laps before giving way to Kevin Cormier on lap-4.  Gary Patnode was third behind Clement with Jeremy Lavoie fourth and Rich Hammann and Matt Clement side by side for fifth.  Patnode worked his way to the inside of Jay Clement on lap-5 to move into third and his move brought Hammann up to fourth and Devon Jencik fifth as Jay Clement fell back to 11th place.

Hammann went by Lavoie on lap-10 to move into third place as Cormier continued to lead Patnode at the front of the pack.  Dana Wray spun coming off of turn 4 on lap-13 but she was able to get back into the race and the race stayed green.  With 10 laps to go, Cormier was still in command followed by Patnode, Hammann, Lavoie, Devon Jencik, Alexandra Fearn, Matt Clement, Matt Scappini, Damian Palardy, and Ari Jencik.  Hammann made a move to the inside of Patnode to move into second and Fearn took fifth from Devon Jencik on lap-17.

Hammann quickly closed the gap to Cormier for the lead and with 6 laps to go, he was right on Cormier’s back bumper.  Cormier’s car got loose in turn 4 on lap-21, which allowed Hammann all the room he needed to take over the race lead.  Fearn took fourth from Lavoie on lap-22 as Hammann was starting to stretch out his advantage over Cormier.  Hammann took the checkered flag to pick up his third win of the 2022 season.  Cormier held on for second with Patnode, Fearn, and Lavoie rounding out the top-5. 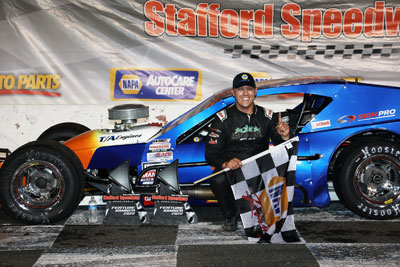 In the 40-lap SK Modified® feature event, Dan Wesson took the early lead from pole position with Keith Rocco quickly moving into second.  Ronnie Williams moved up to third with Marcello Rufrano and Anthony Bello side by side for fourth place.  Rocco took the lead from Wesson on lap-4 but he lost the lead to Williams on lap-5.  Rufrano was up to third with Wesson fourth and Bryan Narducci up to fifth when the caution flew with 5 laps complete for Noah Korner, who hit the wall in the middle of turns 1+2.

Williams led lap-6 on the restart but Rufrano worked his way to the inside of Williams and he took the lead from Williams on lap-7.  Narducci was up to third and he pulled alongside Williams for second on lap-9 while Rocco and Cory DiMatteo were side by side for fourth place behind Williams and Narducci.  DiMatteo took fourth on lap-10 while Narducci was finally able to get by Williams for second.  DiMatteo went around Williams on lap-14 to move into third and now Stephen Kopcik was right behind Williams for fifth.  Michael Gervais hit the turn 2 wall and Dan Wesson spun in turn 2 to bring the caution flag out with 14 laps complete.

Rufrano took the lead back under green while DiMatteo moved into second.  DiMatteo got to the inside of Rufrano on lap-15 and he had the lead by a nose at the line.  DiMatteo got clear of Rufrano on lap-16 and now Narducci was side by side with Rufrano for second with Williams in fourth and Kopcik and Rocco side by side for fifth with Todd Owen just behind them in seventh place.

At the halfway point of the race, the order was DiMatteo, Narducci, Rufrano, Williams, Kopcik, Owen, Rocco, Tyler Hines, Michael Christopher, Jr., and Andrew Molleur.  Williams made a move to the inside of Rufrano on lap-24 in the fight for third and they ran two laps side by side before Williams got clear into third.  Narducci was applying heavy pressure to DiMatteo for the lead but DiMatteo was able to fend off his challenges for the time being.

With 5 laps to go, DiMatteo was still in front with Narducci right behind him in second.  Williams was third followed by Rufrano and Kopcik.  DiMatteo held Narducci off to the checkered flag to pick up his first win of the 2022 season.  Following post-race inspection, Narducci’s car was found to have violated SK Modified® rule 20E – 10.4 Section F – Transmission and he was disqualified from the feature finish, moving Williams into second and Rufrano into third.  Kopcik and Owen round out the revised top-5. 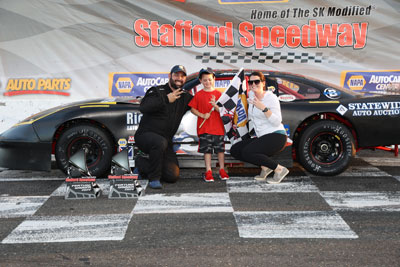 In the 30-lap Late Model feature, Darrell Keane took the lead on the opening lap from Paul Arute with Michael Bennett taking second on lap-2.  Wayne Coury, Jr. took third on lap-2 with Arute slotting into fourth, just in front of Tom Fearn in fifth.  Adam Gray and Michael Wray were dueling side by side for sixth when Tom Fearn got into Arute and damaged his right front fender and flattened his right front tire.  Fearn limped back to pit road while the race stayed green with Keane leading Bennett and Coury.  Gray took fourth on lap-8 with Wray and Kevin Gambacorta now side by side for fifth place.  Gambacorta got clear of Wray on lap-9 to move into fifth and Wray now had to deal with Andrew Molleur and Ryan Fearn.  Molleur took sixth from Wray on lpa-10 and Fearn got by Wray on lap-11 to move into seventh and drop Wray back to eighth place as Keane continued to hold the lead, but Bennett was slowly closing in on the leader.

Gray took third from Coury on lap-15 and his move allowed Gambacorta to follow him through and move into fourth and drop Coury back to fifth as Bennett was still slowly reeling in Keane for the race lead.  The caution flew with 21 laps complete for a spin coming out of turn 2 by Paul Varricchio, Jr.

Gray made a 3-wide move to the inside of Keane and Bennett on the restart to take over the race lead.  Keane took second behind Gray with Coury third, Molleur fourth, and Gambacorta fifth as Bennett slid all the way back to sixth.  Gambacorta continued his charge to the front as he took fourth place from Molleur on lap-25.  Gambacorta worked his way to the inside of Coury and he took third place on lap-27 while Keane was still giving chase to Gray.

Gray led Keane to the checkered flag to pick up his third consecutive and third overall Late Model win of the 2022 season.  Gambacorta finished third with Coury and Bennett rounding out the top-5. 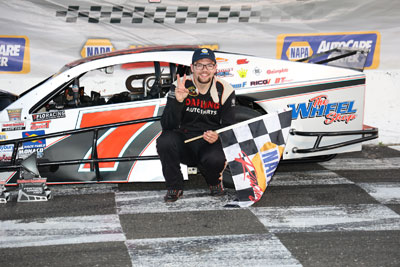 In the 20-lap SK Light feature event, Vinny Anglace spun at the start and brought the caution out before the first lap could be completed.  Charlile McDougall and Jason Chapman went wheel to wheel for the lead on the restart with Chapman coming out with the lead.  McDougall settled into second but he was under pressure from Tyler Barry, who took second on lap-3.  Joey Ferrigno was fourth in line followed by Cassandra Cole in fifth.  Ron Midford, Jr., Anthony Forino, and Casey Vogt all spun in turn 1 to bring the caution back out with 3 laps complete.  Bob Charland was sent to the rear of the field by Stafford officials for making contact with Midford.

Chapman and Barry went wheel to wheel for the lead on the restart with Chapman holding he lead by a nose at the line.  Barry crossed Chapman over and went to the inside groove on lap-5 and he moved into the lead.  Behind the two leaders, the action was furious as Tyler Chapman emerged from a pack of cars to take third with Ferrigno fourth and Alexander Pearl and George Bessette, Jr. side by side for fifth place.  Pearl went around Ferrigno to move into fourth on lap-8 and Bessette followed him by to take fifth and drop Ferrigno back to sixth on what would have been lap-9 but the caution came out for Charland, who spun into the turn 2 wall with 8 laps complete.  This put Ferrigno back into fifth and Bessette to sixth.

Barry took the lead back under green with Pearl in second.  Bessette took third with Jason Chapman back to fourth and Tyler Chapman in fifth.  Pearl took the lead from Barry on lap-11 with Bessette and the Chapman brothers right behind him.  Derek Debbis, who started scratch on the field, worked his way into sixth and he took fifth place from Tyler Chapman on lap-15.

Debbis was now applying heavy pressure to Tyler Chapman and Bessette was all over the back bumper of Barry for  second with 3 laps to go.  Pearl led Barry and Bessette to the checkered flag to pick up his second consecutive and second overall SK Light win of the 2022 season.  Debbis and Jason Chapman rounded out the top-5. 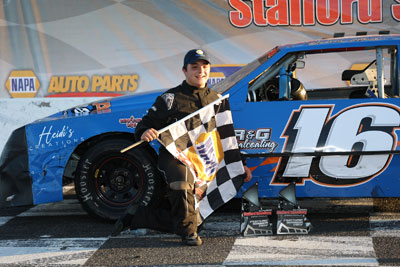 In the 20-lap Street Stock feature event, Bill Cote took the lead at the green after Chris Danielczuk’s car was black flagged for leaking.  Nickolas Hovey quickly moved into second from his fifth place starting position and he took the lead from Cote on lap-3.  Bert Ouellette was third in line with Ryan Waterman and Johnny Walker making up the top-5.  Cote got out of shape in turn 2 on lap-5 but he was able to recover and he fell to the rear of the field.  Waterman was now in second behind Hovey on lap-7 with Ouellette, Bobby Stirk, III, and Travis Hydar making up the top-5.

Hydar went by Ouellette to take over third place on lap-11 and he took second from Waterman on lap-12 as Hovey continued to hold the lead.  Ouellette’s good run came to a premature end as his car dropped off the pace on lap-13 and he crawled back to pit road where he parked for the evening.

With 5 laps to go, the order was Hovey, Hydar, Stirk, Waterman, and Jason Finkbein making up the top-5.  Finkbein took fourth from Waterman on lap-19 and he brought Travis Downey with him into fifth to drop Waterman back to sixth.  At the front it was all Hovey as he took down his first win of the 2022 season.  Hydar finished second with Stirk, Finkbein, and Downey rounding out the top-5.