(Stafford Springs, CT)—Stafford Speedway hosted another round of Stafford Weekly Racing on Friday, May 20th with Open Modified cars on hand for the Call Before You Dig Open 81.  Stephen Kopcik took down his first SK Modified® feature win of the 2022 season, while Kevin Gambacorta in the Late Model feature and Rich Hammann in the Limited Late Model feature events were both winners for the second consecutive week.  Chris Matthews won a rain shortened SK Light feature for his first SK Light feature win at Stafford since September 5, 2008 and Jason Finkbein scored his very first career feature win at Stafford in a photo finish with Travis Downey that was easily the best finish of the night. 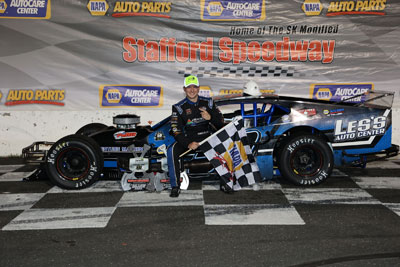 Talman took the lead on the restart with Hines taking second.  Kopcik and Meservey were side by side for third with Cory DiMatteo moving up to fifth.  Hines pulled alongside Talman on lap-10 but Talman was able to maintain the lead by a nose at the line.  With Hines and Talman side by side for the lead, Kopcik was now right behind the two lead cars in third place.  Hines was able to make a pass on lap-13 to move back into the lead with Kopcik taking second to drop Talman back to third.  DiMatteo was now fourth with Ronnie Williams in fifth on lap-15.

Kopcik took the lead from Hines on lap-16 with a pass in turn 2.  Williams took fourth place from DiMatteo on lap-19 with Talman still in third place and giving chase to Kopcik and Hines at the front of the pack.  With 10 laps to go, it was still Kopcik out front with Hines, Talman, Williams, and DiMatteo making up the top-5.  Todd Owen was sixth followed by Bryan Narducci, David Arute, Michael Christopher, Jr., and Jon Puleo.  The caution came out with 39 laps complete for a spin by Dylan Kopec coming out of turn 4 that set up a green white checkered finish.

Kopcik took the lead on the restart with Talman in second.  Hines and Williams were side by side for third but it was all Kopcik as he took down his first win of the 2022 season.  Talman finished second with Williams nipping Hines at the line for third and Narducci rounding out the top-5. 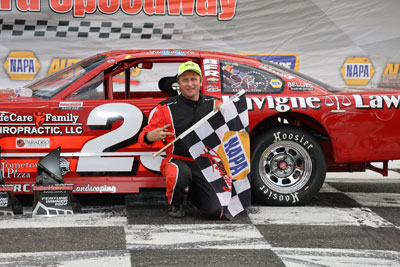 In the 30-lap Late Model feature event, Wayne Coury, Jr. took the early lead at the green with Dave Wray taking second.  Paul Varricchio, Jr. was third in line with Paul Arute fourth and Tom Fearn in fifth.  Varricchio took second from Dave Wray on lap-4 and his move brought Arute up to third, Fearn to fourth, Michael Bennett to fifth, and Kevin Gambacorta to sixth as Wray slipped back to seventh.  Fearn took third from Arute on lap-5 and Bennett and Gambacorta followed suit on lap-7 to move into fourth and fifth as Arute fell back to eighth place as Mike Wray took sixth and Darrell Keane took seventh.

With 10 laps to go, Fearn was still in command with Gambacorta right behind him in second.  Varricchio was third in line followed by Coury, Mike Wray, Bennett, Andrew Molleur, Adam Gray, Keane, and John Blake.  Gambacorta was right on Fearn’s back bumper and applying heavy pressure for the lead but Fearn was able to fend off his challenge with 7 laps to go.  Gambacorta was able to make a move to the inside of Fearn to move into the lead on lap-24.

Gambacorta led Fearn to the checkered flag to pick up his second consecutive Late Model feature win.  Varricchio finished third with Coury and Mike Wray rounding out the top-5. 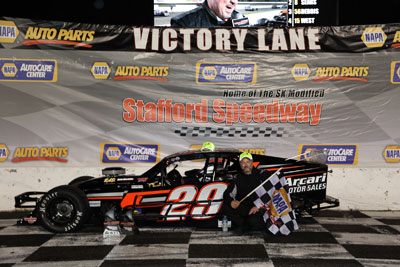 In the 20-lap SK Light feature event, Alina Bryden led the field to the green and she took the early lead with Amanda West, Norm Sears, and Chris Matthews all lined up right behind her.  Bob Charland was fifth in the early laps followed by Derek Debbis, Charlie McDougall, Ed Chicoski, Meghan Fuller, and Jason Chapman.

Matthews quickly worked his way into second and he took the lead from Bryden on lap-5.  West was still in third behind Bryden with Sears fourth and Debbis taking fifth from Charland.  George Bessette, Jr. and Chicoski came together and hit the wall in the middle of turns 1+2 to bring the caution out with 7 laps complete.

Matthews took the lead back under green with West, Sears, Debbis, and Fuller lined up behind him.  The order shuffled on lap-11 when Sears took second, which opened the door for Debbis to take third and drop West from second back to fourth, just in front of Fuller.  Bryden, Josh Carey, and Zack Aszklar all spun coming out o fturn 4 to bring the caution out with 12 laps complete while Hailey Desaulniers was spun around in turn 3 also.

Under the caution, rain began to fall and with the race being past the halfway point, the red and checkered flags were displayed, making Matthews the winner.  Sears finished second with Debbis, West, and Fuller rounding out the top-5. 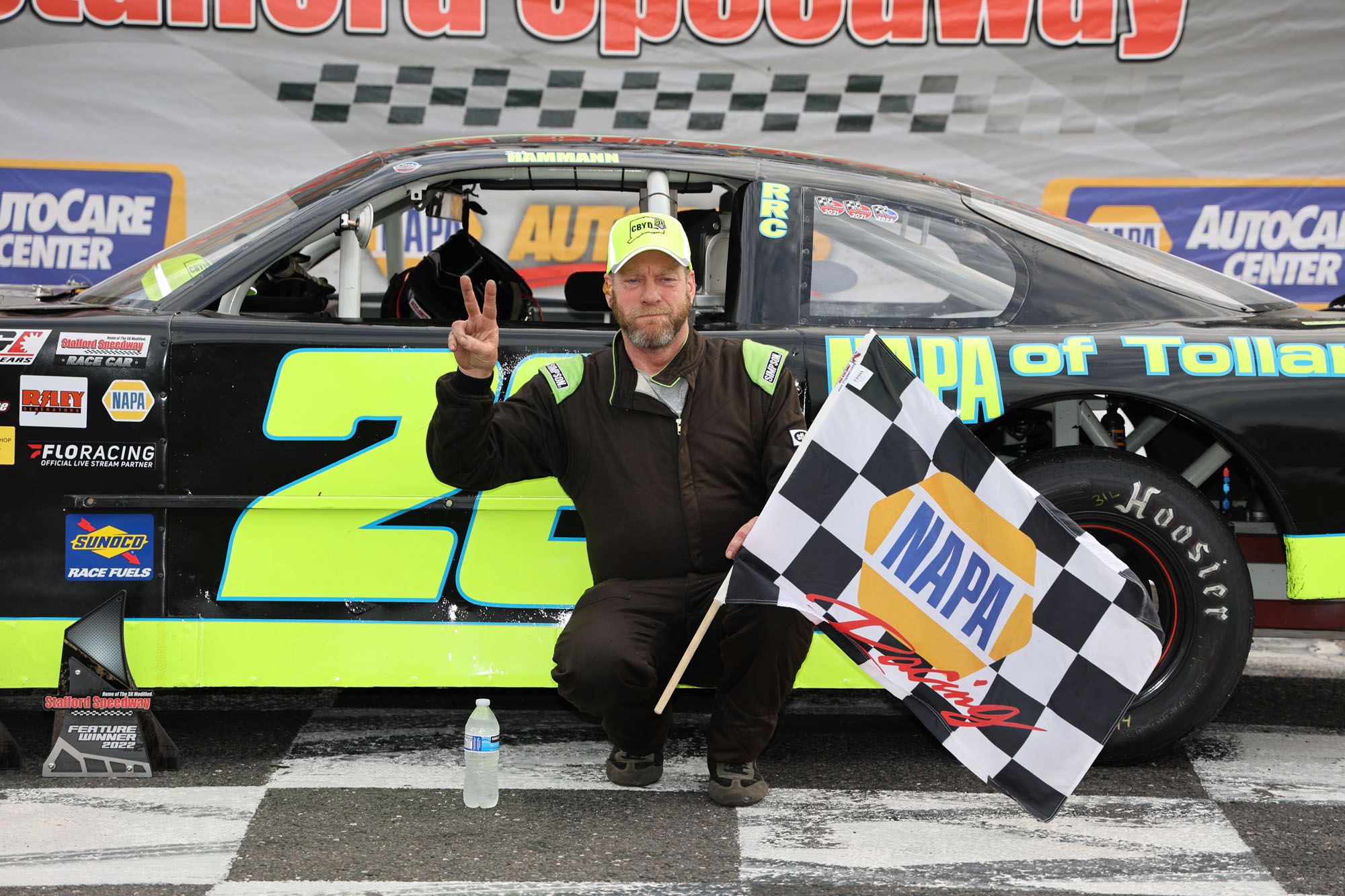 In the 20-lap Limited Late Model feature event, Alexandra Fearn led the field to the green flag and she took command of the race on the opening lap.  Gary Patnode made a move around Damian Palardy to take over second with Devon Jencik in fourth and Rich Hammann and Jeremy Lavoie side by side for fifth place.  Hammann won that duel and took over fifth place on lap-2.

On lap-5 Devon Jencik slipped from foruth back to sixth as Hammann moved into fourth and Lavoie took fifth as Fearn continued to hold the race lead with Patnode and Palardy still giving chase.  Hammann got around Palardy to take over third place on lap-7 just before the caution flag flew with 7 laps complete for Scott Clement who got into the wall and came to a stop at the end of the frontstretch.

The race went back to green with Patnode taking the lead and Hammann moving up to second which dropped Fearn back to third as she didn’t come up speed as quickly as the other lead cars.  The caution came right back out with 8 laps complete as Matt Scappini spun in turn 1 and collected the car of Ari Jencik.

Hammann powered his way into the lead on the outside of Patnode on the restart with Patnode slotting into second.  Fearn was third with Lavoie taking fourth from Palardy to drop him back to fifth.  Matt Clement was sixth followed by Devon Jencik, Kevin Cormier, Jay Clement, and John Orsini.  Patnode’s great run came to a premature end as his car dropped off the pace on the backstretch on lap-11.  Patnode’s car came to a stop on the frontstretch, which brought the caution flag back out with 11 laps complete.

Hammann led the field to the checkered flag to pick up his second consecutive victory of the 2022 season.  Lavoie finished second with Matt Clement, Fearn, and Devon Jencik rounding out the top-5. 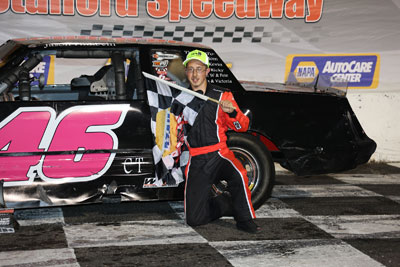 In the 20-lap Street Stock feature event, Chris Danielczuk brought the field to the green flag and led the field to the green flag.  He held the lead until lap-3 when Jason Finkbein took over the lead.  Danielczuk held off a challenge from Marvin Minkler to keep second.  Minkler would lose third place to Travis Downey on lap-6 with Ryan Waterman in fifth place when the caution came out with 6 laps complete for a spins by Nickolas Hovey on the frontstretch and Bobby Stirk, III in turn 1.

The field completed one more lap with Finkbein holding the lead over Danielczuk before the caution came back out for a spin by Tyler Trott coming out of turn 4.

Finkbein took the lead on the lap-8 restart with Downey moving into second.  Waterman moved into third on lap-10 and he brought Adrien Paradis, III with him into fourth and Bert Ouellette into fifth as Minkler slid back to sixth place.  Downey looked high and low for a way around Finkbein and he was able to get alongside Finkbein on lap-14 but couldn’t complete the pass.

Downey was finally able to make a run to the inside of Finkbein in turn 3 on lap-19 and as the cars took the white flag they were nose to nose.  Downey and Finkbein ran the final lap side by side with neither driver falling behind the other.  The two cars came to the checkered flag in a near dead heat photo finish with Finkbein winning the race by mere inches or .005 seconds.  Waterman finished third with Travis Hydar and Ouellette rounding out the top-5.