(Stafford Springs, CT)—Stafford Speedway hosted First Responder Friday on September 9 with the TC 13 Shootout joining Stafford’s five weekly divisions in feature action.  The SK Modified® division ran their regularly scheduled 40-lap feature as well as the 3rd Annual TC 13 Shootout, a 13 lap race contested between the top-13 finishers from the 40-lap feature.  Michael Christopher, Jr. won the TC 13 Shoot Out while Jon Puleo was a first time career winner in the SK Modified® feature, Andrew Durand was another first time career winner in the Late Model feature, Derek Debbis scored his third win of the season in the SK Light feature, Matt Clement led his brother Jay to the checkered flag to pick up his second win of the 2022 season, and Bobby Stirk, III picked up his fifth win of the season in the Street Stock feature.  Quinn Christopher awarded three The Joie of Seating racing seats to through the Ted Christopher Safety Initiative and the three lucky winners were Keith Rocco, who finished 13th in the 40-lap SK Modified® feature, Christopher, who won the TC 13 Shoot Out, and SK Light driver Casey Vogt, who was the winner of a random draw consisting of all drivers signed in to race. 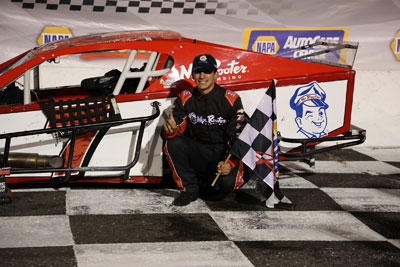 In the 40-lap SK Modified® feature event, Michael Christopher, Jr. took the lead at the start with Tyler Leary in second.  Marcello Rufrano was third in line but he took second from Leary on lap-3.  Rufrano continued his charge to the front as he took the lead from Christopher on lap-4.  Behind the two leaders, Michael Gervais, Jr. was third in line with Leary back to fourth and Bryan Narducci in fifth.  With 10 laps complete, the order was Rufrano, Christopher, Gervais, Leary, and Narducci.  Sixth through tenth was Cory DiMatteo, Todd Owen, Tyler Hines, Andrew Molleur, and Ronnie Williams.  The caution came out with 11 laps complete as Anthony Bello spun coming out of turn 4 with a flat tire.

Noah Korner brought the caution right back out on the restart with a spin in turn 2.  Rufrano took the lead on the restart with Gervais and Christopher wheel to wheel for second and DiMatteo and Leary wheel to wheel for fourth place behind them.  DiMatteo took fourth on lap-14 with Narducci taking fifth to drop Leary back to sixth while Gervais and Christopher were still side by side giving chase to Rufrano.  Gervais and Christopher touched wheels coming out of turn 4 on lap-15 with Gervais spinning and collecting several cars, including Ronnie Williams, Jon Puleo, Matt Vassar, Teddy Hodgdon, John Sandberg, John Montesanto, and several others.

The field completed one lap with Rufrano holding the lead over DiMatteo before the caution came out for Montesanto, whose car caught fire under the hood going into turn 3 and he came to a stop in turn 4.

The next restart saw DiMatteo and Rufrano touch tires going into turn 3 with Rufrano spinning to the infield and DiMatteo spinning backwards into the turn 3 wall to bring the caution back out.  This put Leary and Molleur on the front row with Owen and Dylan Kopec in the second row for the next restart.  Under the caution, Narducci developed a flat tire and had to come to pit road just as the field was going back to green.

Owen took a three-wide look for a second but backed out of the move on the restart as Leary took the lead with Molleur and Owen behind him.  Jon Puleo was up to fourth and Kopec was fifth in line.  David Arute was up to sixth with Troy Talman, Noah Korner, Christopher, and Hines making up the top-10.  The caution came back out with 19 laps complete for a spin in turn 4 by DiMatteo.

Leary took the lead back under green with Molleur, Owen, Puleo, and Arute lined up behind him.  Narducci, Hines, Nick Halkowicz, and Nick Giardina all spun in turn 2 to bring the caution back out with 20 laps complete.

Molleur took the lead from Leary on the restart from the high groove with Puleo, Owen, and the side by side duo of Arute and Korner lined up behind him.  Arute cleared Korner on lap-24 to take fifth while Leary was pressuring Molleur for the race lead.

After working the inside line against Molleur for the last 10 laps, Leary pulled alongside Molleur on lap-35 but Molleur was able to fend off Leary’s challenge.  Leary again got to the inside of Molleur on lap-37and took the lead but his good night came to an end as they raced into turn 1 and Molleur got loose and made contact with Leary’s left rear, which sent Leary into a spin and brought the caution flag out with 38 laps complete.

Puleo took the lead from Molleur on the restart with Owen in third, Arute in fourth, and Christopher in fifth.  Molleur couldn’t get back close enough to Puleo to make a move as Puleo took down his first career SK Modified® feature victory.  Molleur finished second with Owen, Arute, and Christopher rounding out the top-5.  Just after the checkered flag, Keith Rocco, who finished 13th, spun in turn 1 along with Anthony Bello and two other cars.  In NAPA Victory Lane, Puleo drew the number 5 to invert the top-5 finisher for the TC 13 Shoot Out. 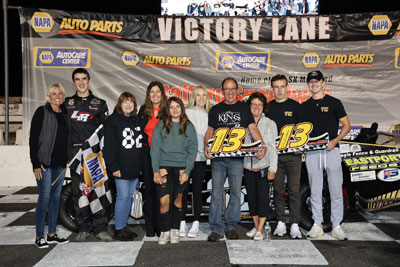 In the 13-lap TC Shootout, Christopher and Arute went wheel to wheel for the lead with Owen third, Narducci fourth, and Rufrano fifth.  Arute was able to clear Christopher on lap-4 while Narducci came up to second before he got loose and spun in turn 2, which collected Talman and brought the caution out with 4 laps complete.  Several other cars spun on the backstretch after Talman’s spin, including DiMatteo, Rufrano, and Owen.

Arute took the lead on the restart with Christopher on his outside and Molleur behind him.  Leary got into the turn 4 wall to bring the caution back out with 5 laps complete. 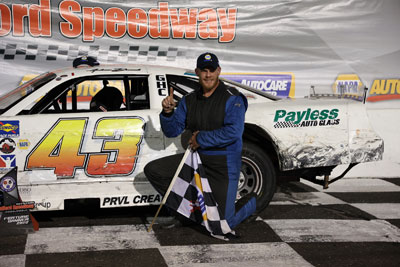 In the 30-lap Late Model feature event, Andrew Durand took the lead at the start with Paul Varricchio, Jr. holding off John Blake for second.  Varricchio and Blake touched on lap-2 with Blake going around and several cars behind him were collected including Paul Arute, Duane Provost, Kevin Gambacorta, Alexandra Fearn, Tom Fearn, and several others.

The caution came right back out on the restart as Duane Noll and Michael Bennett made contact with Bennett coming to a stop against the frontstretch wall and Noll spun to the infield grass in turn 1.  The next restart saw Durand take the lead with Varricchio behind him in second.  Wayne Coury Jr. was third with Adam Gray fourth and Kevin Gambacorta fifth.  Gray quickly took third from Coury on lap-3 with Andrew Molleur taking fifth from Gambacorta as Durand continued to lead Varricchio.

Gambacorta made a move to the inside of Molleur on lap-12 to move into fifth.  Gambacorta’s pass allowed Michael Wray to follow him by Molleur and take sixth place and drop Molleur back to seventh as Durand was still leading Varricchio, Gray, and Coury.  After applying heavy pressure to Varricchio for about 10 laps, Gray was finally able to make a pass on lap-21 to move into second place behind Durand.  Varricchio fell back to third just in front of Coury while Gray was starting to slowly reel in Durand at the front of the field.

Coury made a move to the inside of Varricchio on lap-25 to move into third, which brought Gambacorta into fourth, and Wray to fifth as Varricchio slid back to sixth place.  With two laps to go, Gray was within a car length of Durand, but he couldn’t make a move to take the lead.  Gray closed in on Durand’s bumper on the final lap, but Durand was able to hold him off to record his first career win in the Late Model division at Stafford.  Coury finished third with Wray and Molleur rounding out the top-5. 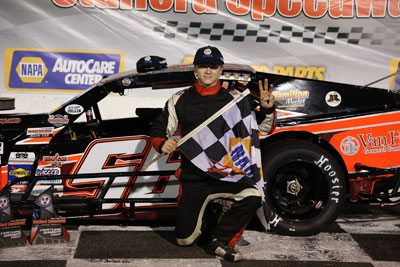 In the 20-lap SK Light feature event, Bob Charland took the lead at the start with Ron Midford, Jr. racing wheel to wheel with Jason Chapman for second.  Midford and Chapman ran side by side for two laps before Chapman took second on lap-3.  Derek Debbis was fourth in line with Chris Matthews in fifth place.  Debbis made a move to the inside of Midford on lap-7 for third but Midford was able to hold off his challenge and maintain the position.  Debbis made the same move on lap-10 and this time he was able to make the pass stick as he took over third place.  Barry got by Matthews to take fifth place while Jason Chapman was still giving chase to Charland for the race lead.

With Charland and Chapman dueling for the lead, Debbis was able to close in on the two leaders and he went by them both on lap-14 to take over the lead.  Barry worked his way from fifth up to second in the closing laps but he couldn’t catch Debbis as Debbis took down his third win of the 2022 season.  Charland finished third with Jason Chapman and George Bessette, Jr. rounding out the top-5.

In the 20-lap Limited Late Model feature event, Jay Clement took the lead at the green flag with his brother Matt Clement, Alexandra Fearn, Devon Jencik, and Damian Palardy lined up behind him.  Matt Clement took the lead from Jay Clement on lap-7 with a pass in turns 3+4.  Fearn was still third with Devon Jencik fourth and Palardy in fifth.  Gary Patnode was sixth with Kevin Cormier, Jeremy Lavoie, Rich Hammann, and Matt Scappini lined up behind him.

In a caution free race, Matt Clement led his brother Jay to the checkered flag to pick up his second win of the 2022 season.  Fearn finished third with Devon Jencik and Palardy rounded out the top-5. 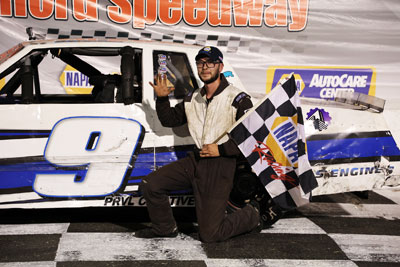 In the 20-lap Street Stock feature event, Bill Cote took the lead at the start with Adrien Paradis, III quickly moving from fifth up to second behind Cote.  Travis Hydar also was on the move in the early laps, going from seventh at the start up to third with Bobby Stirk, III in fourth and Jason Lafayette in fifth.  The caution came out with 3 laps complete as Cote spun after contact with William Dillon, who he was attempting to put a lap down.  Behind Cote, Hydar also went around, which collected the car of Travis Downey.

Paradis and Bobby Stirk went door to door for the lead back under green with Stirk finally getting clear from Paradis on lap-6.  Bert Ouellette was up to third behind Stirk and Paradis with Lafayette in fourth and Jason Finkbein in fifth.  Cindy Stirk spun in turn 4 but was able to get going again and the race stayed green.  At the halfway point of the race, Stirk was still in command followed by Paradis, Ouellette, Lafayette, and Finkbein.  Ryan Waterman was sixth and he was followed by Hydar, Brandon Warren, Tyler Trott, and Sam Calvo.  Trott spun in the middle of turns 3+4 to bring the caution back out with 14 laps complete.

Stirk charged into the lead on the restart with Ouellette taking second.  Paradis was third with Lafayette holding off Hydar for fourth place.  Hydar fell back to seventh on lap-17 as Finkbein took fifth and Waterman took sixth.  Stirk led the field to the checkered flag to pick up his fifth win of the 2022 season.  Ouellette finished second with Paradis, Finkbein, and Hydar rounding out the top-5.